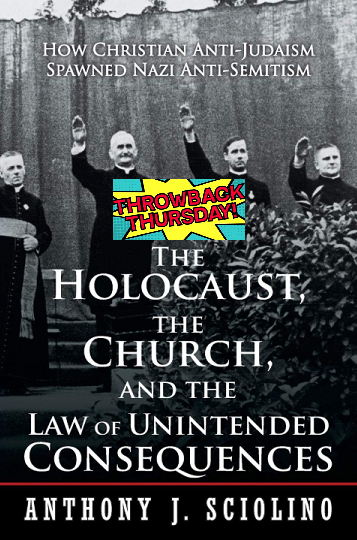 Last month, the world commemorated the 75th anniversary of the liberation of Auschwitz even while we’re concurrently witnessing a rising trend in populist, anti-Semitic violence. For this week’s “Throwback Thursday” installment, we’re going to revisit a post that was originally published back on October 29, 2015 and has been revised.

The Holocaust, the Church, and the Law of Unintended Consequences
By Anthony J. Sciolino
iUniverse, 2012, 270 pp.

On October 28, 1965, pope Paul VI issued Nostra Aetate (Latin, “In our Time”), the Declaration on the Relation of the Church with Non-Christian Religions of the Second Vatican Council. The document was a RADICAL change in the “unchanging” Roman Catholic church’s approach to “non-Christian” religions. Instead of viewing Judaism, Islam, Hinduism, and Buddhism as false religions, as it had in the past, with this document Catholicism declared there was a certain amount of truth in all religious faiths and that it was possible for people of other works-righteousness creeds to earn their salvation as well. Nostra Aetate took an especially conciliatory tone towards the Jews.

In October, 2015, many Jewish leaders commemorated the 50th anniversary of the Nostra Aetate declaration with its startlingly dramatic change in church policy. Regrettably, many of today’s Catholics are entirely unaware of the church’s long history of militant anti-Semitism. Jews throughout Europe were harassed and persecuted by the Catholic population over the centuries. Intolerance was often incited and encouraged by the Catholic clergy. Jews were the victims of involuntary baptisms, enforced segregation, boycotts, exclusionary quotas, pogroms, massacres, and expulsions. When European anti-Semitism reached its culmination in the 20th century Holocaust, Adolf Hitler defended himself by appealing to church history:

“As for the Jews, I am just carrying on with the same policy which the Catholic church has adopted for fifteen hundred years, when it has regarded the Jews as dangerous and pushed them into ghettos, etc., because it knew what the Jews were like.” – Adolf Hitler

But this ex-Catholic has a question regarding Catholic anti-Semitism: If the RC church has always been guided by the Holy Spirit and is the “foundation of truth” as Catholics claim, and if the Catholic popes have been infallible in vital matters of faith and morals as they also claim, then how could the church have been SO TERRIBLY WRONG, for century after century, when it came to its anti-Semitic policies and practices? Popes John Paul II, Benedict XVI, and Francis have all officially apologized for the anti-Semitic policies and practices of their predecessors. What does that say for the claims of a divinely-led Magisterium?

I praise the Lord daily that He has freed me from the chains of the worldly-minded Catholic church and saved me by His grace through simple faith in Jesus Christ alone. Contrary to Nostra Aetate, God’s Word says salvation can only be found in Jesus Christ.

“Salvation is found in no one else, for there is no other name under heaven given to mankind by which we must be saved.” – Acts 4:12

“Whoever believes in him is not condemned, but whoever does not believe stands condemned already because they have not believed in the name of God’s one and only Son.” – John 3:18

But we reach out to the lost with the love of Jesus Christ, not with hatred.

33 thoughts on “Throwback Thursday: Catholic church celebrates 50th anniversary of “Nostra Aetate,” but let’s not forget its anti-Semitic past”