My wife and I purchased our current house sixteen years ago in 2004. It was strictly an emotional purchase. There were many, many obvious drawbacks to the house and property that were disregarded in the heat of the buying moment. We were in competition with other buyers and were advised by our realtor that we needed to make an offer immediately after our first and only viewing. Argh!

An elderly couple, the Fords, were the previous owners of the house. They spent the winters in Florida and didn’t put much money into the house up here in Rochester for several decades. Everything in the house screamed 1975. No updates. All of the appliances were old, old, old.

After we moved in, we updated various parts of the house when we could, but we weren’t millionaires. We had to prioritize. Sometimes it was by necessity when some old system (bathroom tiling, furnace, AC, oven, linoleum, etc.) reached its limit. The old, beige GE refrigerator in the kitchen was already laboring pretty hard when we bought the place. Every year, it struggled a little bit harder to keep the food cold. The recommended fridge temperature is 40F, but even with the settings set to the max, our fridge’s temp was about 50F (and even higher on warm days) according to the small thermometer we kept inside. On a hot summer day, if we didn’t have the air conditioning running, the ice cream in the freezer would partially melt. My wife and I put off buying a new fridge as long as possible, our budget is very tight these days, but a few weeks ago another bowl of partially-melted ice cream was the last straw. It was time to go refrigerator shopping.

I really don’t like to shop, but it had to be done. We spent an entire afternoon at the local Home Depot and Lowes big-box stores getting an education about refrigerators. My wife preferred a side-by-side model, but we were somewhat constricted by space because of a cabinet over the fridge area that would only accommodate models under 69″ high, which ruled out many options. The sales people at the two stores said delivery would be at least a month or six weeks away because the pandemic has played havoc with the new appliances supply chain.

I returned home with a headache from the shopping blitz. A relative suggested we try a smaller, family-owned appliance store in town; Charlotte Appliance. We drove to the store the next morning and they had one Whirlpool side-by-side model left. We jumped on it. Badda bing, badda boom. Three days later the new fridge was delivered and installed (top photo).

My wife and I are so appreciative that the food in the new fridge is actually COLD and the ice cream is frozen SOLID. Whoopee!!!

As a semi-humorous aside, whenever I heard/read Revelation 3:15-16 and its mention of “lukewarm” the last ten or so years, I thought of our struggling GE fridge and its lukewarm/lukecold food.

Postscript: Sorry, I should have included a “before” photo of our old GE jalopy fridge.

Last week, I took a trip to the Tops grocery store at the Panorama Plaza shopping center that’s near us and I happened to glance over at the Alpha and Omega Christian bookstore, also located at the plaza and right next to a GNC (General Nutrition Center) store, and the notion popped into my head to add a little something below the A&O sign in response to the GNC sign.

Many people nowadays are absolutely consumed with diet and fitness, as if they’re trying to stave off their inevitable demise. I mean, there’s people who spend a fortune at GNC every week on vitamins, protein powders, etc. Gyms are popping up everywhere and have become the temples of this new religion of staving off mortality. A healthy diet and some exercise are great, but if you haven’t trusted in Jesus Christ as your Savior by faith alone and walk with Him daily, you’re just NOT “living well” and you have no real hope. The ol’ body’s gonna peter out eventually; it’s a forgone conclusion no matter how many reps you do or how many alfalfa sprout smoothies you drink.

“For bodily exercise profits a little, but godliness is profitable for all things, having promise of the life that now is and of that which is to come.” – 1 Timothy 4:8

Postscript One: Please, no irate letters! I’m not a huge fan of quasi-(c)hristian bookstores, which peddle a LOT of heterodoxy. This particular store stocks quite a few books from TBN prosperity gospel types and also has a Catholic section. But at least they do sell Bibles and “some” books from solid evangelical writers.

Postscript Two: Yup, my version of photoshop is pretty basic!

…but when I do it’s because my wife has one of the “Star Wars” movies on the TV in the other room.

Disclaimer: I don’t mean to offend those who do enjoy “Star Wars.” However, I have a reputation for being very closed-minded about the “Star Wars” franchise that I need to uphold and this frivolous idea somehow popped into my head last night that I thought some might enjoy. 🙂 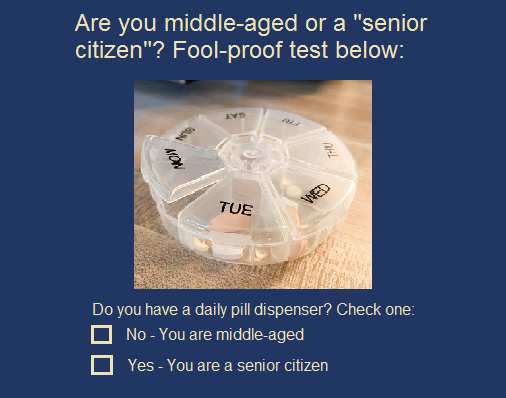 A few weeks ago, I mentioned to my wife that I needed to pick up a daily pill dispenser like the one she had. At my age, it’s becoming more difficult to remember if I took a certain pill or not. My wife surprised me by presenting me with the dispenser above.

Yes! Now that I have daily pill dispenser, I can officially join the ranks of senior citizens!

“The righteous flourish like the palm tree and grow like a cedar in Lebanon. They are planted in the house of the Lord; they flourish in the courts of our God. They still bear fruit in old age; they are ever full of sap and green.” – Psalm 92:12-14

My homemade advertisement above is satirical, but there’s some truth mixed in.

Here’s an observation from one of the older brothers in the pews:

Hipster, mega-church pastors and worship team leaders are trying SO HARD to be culturally “relevant” and cutting-edge cool that it’s becoming ridiculous, pathetic, and even pitiable. Skinny jeans with “pre-manufactured” holes in the knees matched with $100 swag haircuts have become de rigueur, bonus points for tatoos. What’s next?

“Do not be conformed to this world, but be transformed by the renewal of your mind, that by testing you may discern what is the will of God, what is good and acceptable and perfect.” – Romans 12:2