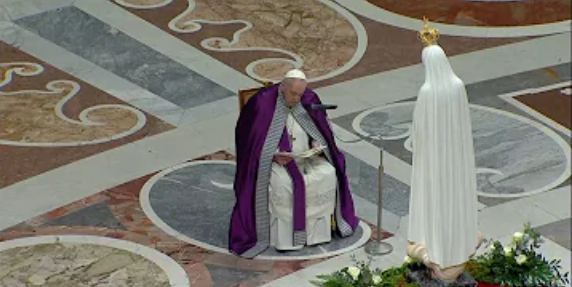 The above article provides some interesting background on the apostate Russian Orthodox church’s alliance with mass murderer and ROC member-in-good-standing, Vladimir Putin.

Yesterday, at 6:30PM Rome time (1:30PM, EST) pope Francis formally “consecrated” Ukraine and Russia to the “immaculate heart of Mary” in concert with all of the Catholic bishops in the world. I was listening to Catholic talk radio while returning home from the grocery on Thursday and host “Mother Miriam” aka Rosalind Moss was excitedly anticipating the event, saying it would be the first time any Roman pontiff specifically consecrated Russia to the “immaculate heart of Mary” in compliance with the instructions allegedly voiced by the Marian apparition at Fatima, Portugal on July 13, 1917. All of this is demonic deception.

Earlier in the week, Ukrainian President, Volodymyr Zelensky, spoke to pope Francis by phone and said he would welcome a Vatican mediation to bring about an end to the Russian invasion of Ukraine. Putin has yet to express any interest in such an option.

Catholic women are unhappy that their church’s clergy is restricted to men – pope, cardinals, bishops, priests, and deacons – and pope Francis is attempting to partially mollify them by altering the Vatican curia‘s constitution and allowing women to head Vatican departments.

St. Patrick’s Day, with its traditional meal of corned beef and cabbage, fell on Thursday, March 17th this year. “Savvy” San Antonio archbishop, Gustavo Garcia-Siller, understood that some Catholics would be celebrating St. Patty’s Day on the more-convenient Friday, so for all of the members of the San Antonio diocese, he conveniently lifted the ban on meat that would have been in effect on Lenten Friday, March 18th. Question: If a Catholic from the next-door diocese of Austin traveled to San Antonio on business on Friday, March 18th and ate a Reuben sandwich for lunch because he was aware of the dispensation, did the Austin Catholic commit a mortal sin because he was still under the auspices of his Austin bishop who had not granted a dispensation? You may remember that American bishops almost en masse allowed U.S. Catholics to eat meat on a Lenten Friday in 2017 without incurring mortal sin because St. Patty’s Day happened to fall on Friday that year (see here).

Both the Church of England and Roman Catholicism are apostate, but some conservative COE clerics note the radical liberalism of their denomination and seek refuge in the relatively more conservative RCC. This is like changing deck chairs on the Titanic. There’s no genuine Gospel in either the COE or the RCC.

Conservative Catholics are horrified by the reforms being discussed by Germany’s current Synodal Path (2019-2023), including married priests, female deacons, recognition of practicing L***ers as full-fledged members, and Catholic-(nominal) Protestant intercommunion.

The New York State Child Victims Act of 2019 temporarily lifted the statute of limitations and allowed adult survivors of priest sexual abuse to file civil suits against the priest predators and/or their diocese or religious order. The Catholic dioceses of Rochester (2019) and Buffalo (2020) both declared bankruptcy to minimize payouts. The justice system already moves slowly, but has been further impeded by diocesan lawyers. The victims are still waiting for their settlements.

Brian Houston and his Hillsong health and wealth prosperity empire are both as phony as three-dollar bills. Shame on all mega-church music directors (aka worship leaders) and compliant pastors who expose their congregations to the Hillsong quagmire via the music.