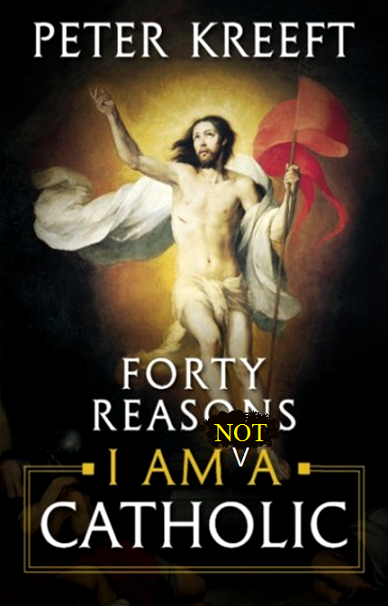 Today, we continue our series examining and responding to Catholic apologist and philosopher, Peter Kreeft’s book, “Forty Reasons I Am A Catholic” (2018). Thanks for joining me.

Claim #9: I am a Catholic because the Catholic church is not Christ’s organization but his organism, his body

In this short chapter, Kreeft argues that the Roman Catholic church is the Body of Jesus Christ. He claims that Jesus Christ gave His body, not just on the cross, but also “in the Eucharist and in the Church” (p. 33). For Kreeft and Catholics, salvation is not obtained solely by faith, in just a spiritual sense, but by physically consuming the consecrated Jesus wafer as a member of the institutional Roman Catholic church (and following the prescribed tenets). He cites Hinduism and Buddhism as inferior religions that rely only on mysticism and Kreeft also criticizes Protestantism for its allegedly deficient doctrine of salvation by God’s grace alone, through faith alone, in Jesus Christ alone. He states that God would not have left us with a purely mystical religion, but meets us two-dimensional creatures with a two-dimensional, sensory/tangible religion comprised of the eucharist and the institutional RC church.

The New Testament refers to the “church” (Greek: ekklesia, “called out assembly”) as a group of people in a particular city or region who have accepted Jesus Christ as Savior by faith alone and gather together as a local fellowship. “Church” is also used in the New Testament in the universal sense of all those the world over who have accepted Christ as Savior by faith alone.

Nowhere in the New Testament do we find “church” referring to the RC institutional monstrosity that rivals many secular governments with layer upon layer of hierarchy and bureaucracy. The early Christian church gradually devolved into religious institutionalism. Genuine spirituality described in the New Testament was replaced by ritualism and formalism controlled by the increasingly powerful clergy. Membership in the institutional RC church ipso facto became THE THING, rather than trusting in Jesus Christ as Savior by faith alone, followed by discipleship in a Gospel-preaching local church. The Holy Spirit had/has no part in the Catholic institutional system.

“The wind blows where it wishes, and you hear its sound, but you do not know where it comes from or where it goes. So it is with everyone who is born of the Spirit.” – John 3:8

“It is the Spirit who gives life; the flesh is no help at all. The words that I have spoken to you are spirit and life.” – John 6:63

We’ve already examined how the RCC grievously misinterprets the Bread of Life discourse in John 6 and the Last Supper accounts in the four gospels to support the eating of the Jesus wafer as the “source and summit of Christian spirituality” (CCC 1324). See here.

In his book, ‘Roman Catholic Theology and Practice: An Evangelical Assessment” (2014), Dr. Gregg Allison does an excellent job of examining Catholicism’s Christ-Church interconnection, whereby the RCC presents itself as the prolongation of the incarnation of Christ. See here.

Without God’s Word and the elucidation of the Holy Spirit, Roman Catholics cannot comprehend a non-institutional church like evangelical Protestantism.

Postscript: While the Roman Catholic church teaches that it alone is the authorized, two-dimensional, institutional Body of Christ, it incongruously grants that all religionists and even atheists may also merit Heaven if they sincerely follow their conscience.

Next week: Claim #10: I am a Catholic because only the Catholic church can save human civilization from spiritual and material destruction