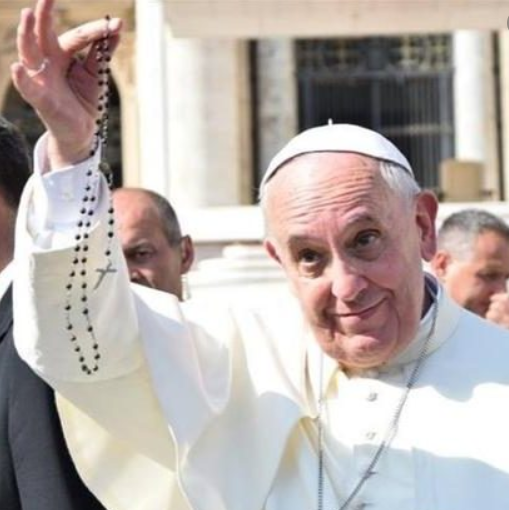 In Roman Catholicism, the month of May is dedicated to Mary. Every May at my Catholic grammar school, we students participated in a procession which culminated in the crowning of the statue of Mary as the “Queen of Heaven” at the adjoining church (see here). Pope Francis is now encouraging Catholics to join him in praying the rosary to Mary throughout this month for her intercession in ending the coronavirus pandemic. Half of Catholic piety is focused on Mary and when Catholics do speak about Jesus it’s as a victim who is allegedly sacrificed on their altars and eaten in the form of a bread wafer.

Contrary to the psychological band-aids mentioned in this article, genuine spiritual peace and joy cannot be found in Roman Catholicism with its system of merited salvation.

I’m Polish American and have a special interest in Poland. Perhaps more than any other European national/ethnic group, Polish identity is intertwined with Roman Catholicism. To be a Pole is to be Catholic. But that is now changing as secularization is creeping into the country. Much of that change is precipitated by young Poles who resent the government’s close ties with the Polish Catholic church. It’s estimated that only 0.2% (80,000) of Poland’s population of 38 million identify as evangelical Christian. 90% of Poland’s counties (voivodeships) do not have an evangelical church.

Speaking of Poles, Polish Catholic immigrants to America in the late-19th century built their churches within their ethnic enclaves with their hard earned dimes and quarters only to see the Irish-American hierarchy claim control of the properties. Dissenting Poles formed the Polish National Catholic church in 1897. Here in Rochester, in the old “Polishtown” neighborhood, St. Casimir church (PNCC) was just a few blocks from St. Stanislaus (RCC). The RCC taught that the PNCCers were schismatics and heretics and would all burn in hell. That condemnatory attitude was relaxed after the Second Vatican Council. The PNCC has about 26,000 members across the U.S. and Canada. The genuine Gospel of salvation by God’s grace alone, through faith alone, in Jesus Christ alone is not preached in either RCC or PNCC churches.

As outcry grows, it’s not a question of “if” the RCC will change its official catechism, which currently labels homosexuality as “intrinsically disordered” (CCC 2357), it’s a matter of when.

Evangelicals are beginning to cave to the LGBT paradigm, and the accommodation is beginning at schools and seminaries.

As local courts continue to sort through the pedophile priest abuse miasma, the diocese of Rochester continues to try to cover-up.

John Stott was actually an enthusiastic supporter of ecumenism with Rome and discouraged outreach to Roman Catholics. Stott led the movement to reconcile with Rome in the U.K, just as Billy Graham did in the United States. D. Martyn Lloyd-Jones broke ties with Stott because of his accommodation and compromise with error. “Seeing ourselves and Roman Catholics as fellow-Christians, we repent of attitudes that have seemed to deny it.” – John Stott.