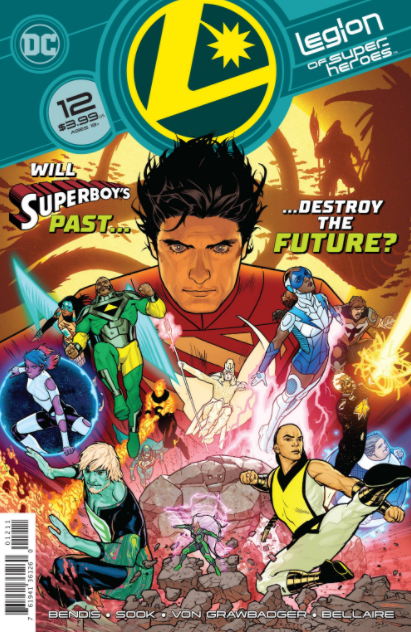 It’s time once again for our monthly, LSH frivolity break (in fact, we’re three weeks past due because of DC’s ongoing publishing issues), so let’s climb aboard our time cube and travel to the 31st Century for another LSH adventure in…

At the end of LSH #11, Superboy and Saturn Girl arrived on New Krypton and confronted planet-destroyer, Rogol Zaar, as all of the other Legionnaires lay strewn about on the battlefield, bloodied and vanquished. As we pick up the action in #12, Superboy engages Rogol Zaar, but he too is subdued. Saturn Girl uses her mind powers to “psychically wake” the entire battered Legion corps, who then engage Rogol Zaar. Just as the Legion appears to be gaining the upper hand, Mordru the Sorcerer appears along with a large contingent of Horraz pirates and a full-scale battle ensues with multiple vignettes highlighting individual Legionnaires and their unique powers. The combined forces of Rogol Zaar and Mordru prove too much for the heroes and defeat looms. Mon-El suddenly appears, returning from his self-imposed exile, to buy the Legion a little more time. Saturn Girl, Dream Girl, and White Witch then confront Mordru with their combined powers, but the showdown is interrupted by Dr. Fate who easily subdues the evil sorcerer. A defeated Rogol Zaar is then returned to the Phantom Zone. As Element Lad leads the effort to rebuild New Krypton, a few Legionnaires ponder whether the preceding battle was the “Great Darkness” that had been foretold and conclude that was not the case. Gold Lantern returns to Earth to retrieve Brainiac 5 for the victory celebration, only to learn that his ring is NOT a Green Lantern ring (gasp!) and that those who issued it to him are not elders of Oa (double gasp!).

Well, folks, this issue wraps up the first year of the Legion’s comeback. My hat is off to DC and the creative team of Bendis, Sook, Von Grawbadger, and Bellaire for a very entertaining ride. There was some speculation on the web that DC was pulling the plug on the LSH after this issue, however, a full-page “Future State Checklist” at the end of this book lists “Future State: Legion of Super-Heroes #1 [of 2]” on sale, tomorrow, January 26th and “Future State: Legion of Super-Heroes #2 [of 2]” on sale February 23rd. That doesn’t necessarily guarantee that DC will be continuing the LSH franchise after “Future State.” No titles are safe given the publisher’s severe financial troubles except for its flagship Superman, Batman, and Wonder Woman franchises.