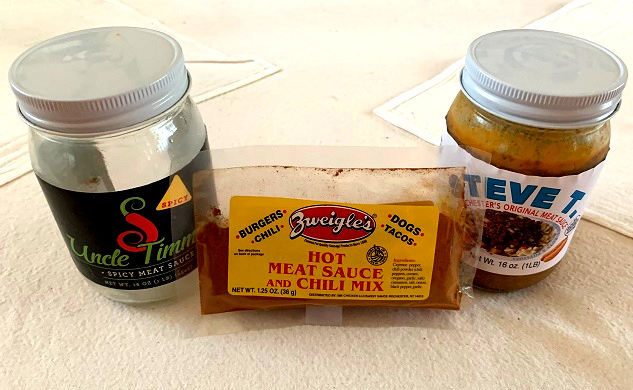 A few weeks back, I introduced another one of Rochester’s delectable contributions to haute cuisine; Rochester meat hot sauce. See here. Just about every local burger joint and hot dog stand in town serves up its own version of the meat hot sauce and you can even buy jars of it at the local grocery stores. Last time, we sampled Momma K’s, Coach Tony’s, and Don’s Original brands. Today, we’re going to try three more varieties: Uncle Timmy’s, Zweigle’s, and Steve T’s.

Uncle Timmy’s: This sauce is very similar in taste and consistency to Coach Tony’s; a very hamburger-y taste, but with a stronger cinnamon accent.

Zweigle’s: Rochester’s maker of the USA’s best hot dogs (see here) offers its own version of meat hot sauce, not in a jar, but a combination of spices in a plastic package. The process involves browning up a pound of fresh ground beef, adding water and the package ingredients, and simmering for half an hour. Voilà! A very tasty meat hot sauce.

Steve T’s: Steve T. is the nephew of Nick Tahou (d.1997), the former proprietor of Nick Tahou’s Hots, home of the original Garbage Plate (see here). Steve has his own hots and burgers joint, but isn’t allowed to use the Tahou name, which is trademarked. This sauce is disappointingly bland and has noticeably more grease than any of the other jarred offerings (note the grease sludge at the top of the jar in the above photo). Steve allegedly follows his Uncle’s Nick’s original meat hot sauce recipe, which makes the case for refinement; the first is not always the best.

It was quite an undertaking to eat my way through these six offerings of Rochester meat hot sauce in order to put together this two-part special post, but my readers’ “need to know” comes before my health.

Let’s sum it all up by ranking the six Rochester meat hot sauces that we’ve reviewed, from best to worst:

Excellent flavor with a good degree of heat. Has an unfair advantage due to the add-your-own fresh ground hamburger.

Delicious. Easily the best of the five jarred varieties. Leans towards a chili flavor with its inclusion of tomato puree and a heavy dose of chili powder.

A bit “rough around the edges,” but a decent alternative if you can’t get Zweigle’s or Don’s Original.

The strong cinnamon accent drops it just a notch below the very-similar Coach Tony’s.

Ach. Very bland and and very greasy. Tastes like liquid lard with a slight hamburger flavor.

All of the Rochester meat hot sauces mentioned above can be conveniently ordered from NY Style Deli via the link below: