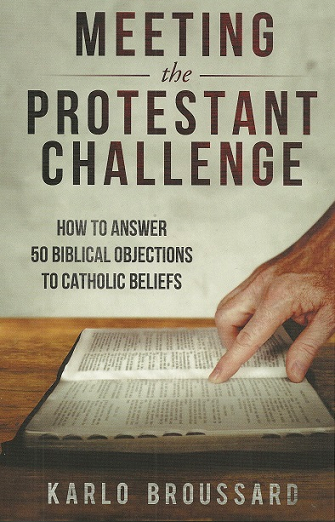 Today, we continue with our series responding to “Meeting the Protestant Challenge: How to Answer 50 Biblical Objections to Catholic Beliefs” (2019), written by Karlo Broussard. With this next chapter, the Catholic apologist continues his section on “The Saints” as he counters evangelical Protestants’ objections that “Invoking the Dead Is an Abomination.”

The Roman Catholic church teaches its members to pray to Mary and its canonized saints for assistance in meriting their salvation and other needs:

“The witnesses who have preceded us into the kingdom, especially those whom the Church recognizes as saints, share in the living tradition of prayer by the example of their lives, the transmission of their writings, and their prayer today. They contemplate God, praise him and constantly care for those whom they have left on earth. When they entered into the joy of their Master, they were ‘put in charge of many things.’ Their intercession is their most exalted service to God’s plan. We can and should ask them to intercede for us and for the whole world.” – CCC 2683

Regarding the practice of praying to the dead, evangelical Protestants cite Deuteronomy 18:10-12:

“10 There shall not be found among you anyone who burns his son or his daughter as an offering, anyone who practices divination or tells fortunes or interprets omens, or a sorcerer 11 or a charmer or a medium or a necromancer or one who inquires of the dead, 12 for whoever does these things is an abomination to the Lord. And because of these abominations the Lord your God is driving them out before you.”

It’s clear from this passage and many others (see here) that God commands believers to refrain from invoking the dead, i.e., necromancy.

(1) Broussard attempts to distinguish between the necromancy specifically condemned in Deut. 18:11 and the invocation of the saints as taught by the Roman Catholic church. First, he presents a definition of necromancy, i.e., “the conjuration of the spirits of the dead for purposes of magically revealing the future or influencing the course of events.” Broussard follows with the Greek roots of the word, “necromancy”: nekros (“dead person”) + manteia (“oracle”/”divination”). Broussard then places v.11 in context with the entirety of Deuteronomy 18:9-21 to assert that the prohibition against necromancy “has to do with seeking secret knowledge apart from God” (p.198).

We can use the information provided by Broussard to swiftly and successfully rebut his sophistical apologia. One of the purposes of necromancy, according to Broussard’s own definition, is for “influencing the course of events.” Catholics certainly do pray to Mary and the saints in the hopes that they can influence the course of future events!

Last week, we discussed how praying to saints is idolatry because it ascribes to them powers and glory that belong to God alone (see here). Nowhere, nowhere, nowhere in the Old or New Testaments is there an example of an obedient believer praying to anyone other than God.

No need to debate this specific topic further. Broussard has unwittingly debunked his own argument.

What does the Bible say about praying to the dead?
https://www.gotquestions.org/praying-to-the-dead.html

Next up: “The Dead Know Nothing”

43 thoughts on “Answering the rebuttals of a Catholic apologist, #36: “Invoking the Dead Is an Abomination””