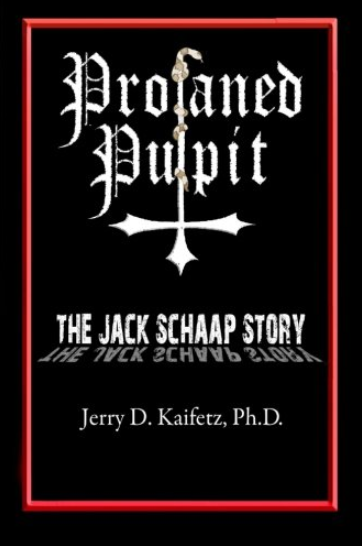 Argh! How many times do I need to buy a self-published book before I wise up?

Recently, I’ve been delving into some of the history of the independent fundamental Baptist (IFB) movement and have posted some critical articles on former IFB leaders, John R. Rice (see here) and Jack Hyles (see here).

I stumbled upon the Kindle edition of this book about another IFB celebrity pastor, Jack Schaap (pronounced “skop,” rhymes with “pop”), a few years ago and finally got around to reading it.

Jack Schaap was a student at Hyles-Anderson College and after graduation became a teacher there of sermon homiletics. Schaap caught the eye of Cindy Hyles, Jack Hyles’ daughter, and the two married, an important career move for Schaap. Jack Hyles was both pastor of First Baptist Church of Hammond, Indiana (FBCH) and founder and chancellor of Hyles-Anderson. After Hyles died in 2001, Schaap succeeded him as pastor of FBCH, which boasted of a weekly attendance of 15,000 and a membership of 50,000, making it the largest IFB church in the country.

Schaap took homiletics into new territory, even by IFB standards, with his screaming and bullying from the pulpit. The arrogance was palpable. Members of FBCH cowered in fear of their pastor. How stunned they all must have been when the 55-year-old Schaap was arrested in 2012 for transporting a 16-year-old girl he was “counseling” across state lines for the purpose of having sexual relations. In March 2013, Schaap was sentenced to 12 years in federal prison. In hindsight, Schaap had time and time again interwoven God-dishonoring, perverted sexual themes into his sermons (see here) and into his books (see here), but nobody spoke up. The FBCH deacon board had been cowed into submission by autocratic Jack Hyles decades prior and were nothing more than ceremonial “yes men” and bobble heads.

FBCH continues on under the pastoral leadership of John Wilkerson. Were lessons learned after the Hyles and Schaap scandals? I imagine many members and attendees of FBCH dropped away. What became of them? Did they look for a solid church or did they allow pastoral malfeasance and scandal to draw them away from the Lord and shipwreck their faith? Been there, done that.

Author Kaifetz was a student at Hyles-Anderson in the early and mid-1980s and had associations with both Jack Hyles and Jack Schaap. When evidence of Hyles’ extramarital affair began surfacing in the late-1980s, Kaifetz initially defended the pastor (he began the “100% for Hyles” counter-scandal campaign), but he left FBCH in 1989 when the proof had become undeniable.

Kaifetz boasts that after learning about Schaap’s arrest in 2012, he sat down at his PC and banged out this book in only five days. I’m surprised it took him that long. Structurally, it’s one of the worst books I’ve ever read. Kaifetz does share a few memories of his personal encounters with Hyles and Schaap, but most of the information that’s presented can be gleaned off of the internet. This book is deceptively mis-titled. There’s actually very little information about Jack Schaap. Mostly, it’s just Kaifetz’s meandering criticisms of the IFB in general. IFB pastors are arrogant. Yup. There’s very little humbleness in IFB preaching. Yup, I get it. Save yourself the money, time, and effort and avoid “Profaned Pulpit.”

The bottom line of this post is to pray for your pastor and encourage him in his ministry.