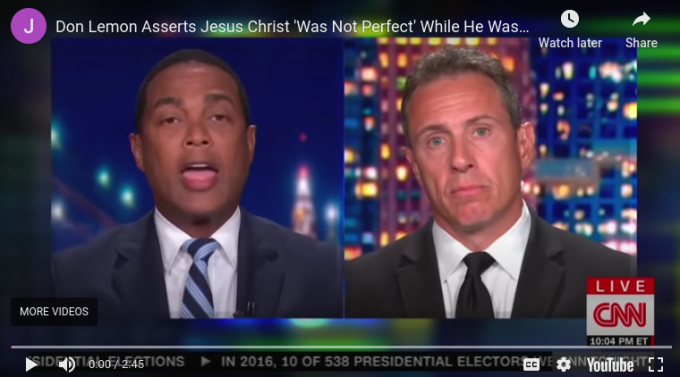 I’m trying to be apolitical. I believe Christians living in America have historically been way too devoted to politics and nationalism, with many even going so far as to claim America was in a special, covenantal relationship with God similar to ancient Israel. I believe we Christians need to think of ourselves more as ambassadors for the Lord and His Kingdom rather than deeply-rooted temporal citizens.

Anyway, I recently came across a news item that I couldn’t wait to share with my friend. CNN hosts, Don Lemon (photo left) and Chris Cuomo, were recently having a discussion about Black Lives Matter and the current reevaluation of America’s founding fathers in light of the fact that many of them were slave owners.

Lemon argued that BLM is right to critically reexamine the founding fathers and tried to hammer home his point with the following ignorant remark:

“Jesus Christ, if that’s who you believe in, Jesus Christ, admittedly was not perfect when he was here on this earth. So why are we deifying the founders of this country, many of whom owned slaves?”

Well, EVERY Bible-believing, blood-bought, born-again Christian would surely recognize the folly of Lemon’s statement, or at least that is what I thought. Jesus Christ, the incarnate Son of God, DID live a life of sinless perfection here on this earth. He lived a perfect life and offered Himself as the atoning sacrifice for the sins of the world. But Jesus conquered sin and death when He rose from the grave and offers forgiveness and eternal life to all who repent of their sin and accept Him as Savior by faith alone.

It was clear from Lemon’s statement that he is not a student of the Bible or a disciple of Jesus Christ. I presented the 2:45-minute video snippet of Lemon’s remarks (see below) to my Democratic Party-loving friend along with a few of my critical comments. In response, the individual claimed that I had misinterpreted Lemon’s remarks. According to my friend, what Don Lemon meant by “Jesus Christ admittedly was not perfect” was either (A) that Jesus was clothed in imperfect human flesh or (B) that Jesus was tempted in all ways, yet without sin. Hmm. Those interpretations were awkward and naive attempts to push a square block through a round hole. In the context of his remarks, Lemon was clearly attempting to present Jesus Christ as having been morally imperfect. My friend and I debated Lemon’s intended meaning for awhile, but the conversation quickly turned personal as usually happens when my friend and I discuss politics, so I dropped it.

Lemon’s remark about Jesus Christ begins at the 1:34 mark in the video below:

The bottom line for me: both the Democratic Party and the Republican Party are part of the world system and will come to an end some day.