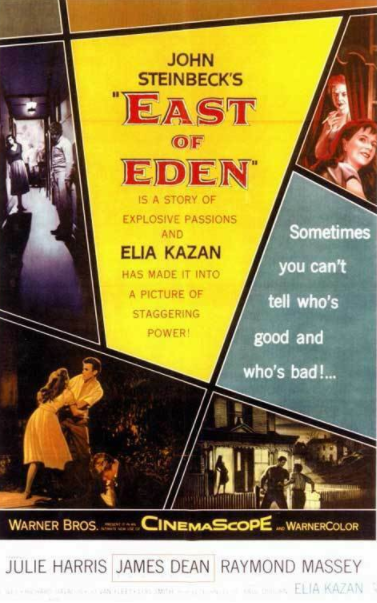 Today, as part of our “Kazan Redux” series, we’re going to re-review director Elia Kazan’s eleventh film, “East of Eden.” The review below was first posted on April 11, 2017 and has been slightly revised.

John Steinbeck’s 1952 novel, “East of Eden,” had been well-received by the public and director Elia Kazan used the last third of the book as the basis for his eleventh film.

In Salinas, California in 1917, aging rancher, Adam Trask (Massey), is determined to make his mark on the world before he dies by developing a process for shipping fresh, ice-packed lettuce to the East via railroad. His loving and dutiful son, Aron (Davalos), supports and encourages him in the endeavor, but his other son, Cal (Dean), continuously rebels against the father’s stern and “puritanical” authority. Cal has a change of heart and decides to help Adam with the lettuce venture, but he also learns his mother (Van Fleet) is not dead as Adam had told the boys, but has become the no-nonsense matron of a profitable brothel in nearby Monterey, information Cal initially keeps to himself. Cal becomes friendly with Aron’s girlfriend, Abra (Harris), who is beginning to chafe at the thought of marrying the “prudish” brother.

When Adam’s lettuce venture fails, Cal secretly borrows money from his mother and contracts a crop of beans, speculating that America’s entry into World War I will drive commodity prices sky-high, enabling him to recoup his father’s lost fortune. As Cal and Abra’s relationship grows warmer, tensions in Salinas reach a boiling point as America enters the war and the town folk take out their frustrations on a German immigrant. Pacifist Aron tries to intervene, but yelling and pushing turn to fisticuffs when Cal enters the melee. Brother then turns on brother.

Cal attempts to present his father with the investment profits after Aron preempts him by announcing he and Abra are engaged, much to her displeasure. Adam refuses the money, which he sees as war profiteering. Humiliated by the rejection, which he interprets as another demonstration of his father’s lack of love, Cal declares he hates Adam and brings Aron to Monterey to vengefully reveal to him the truth about their mother, knowing it will destroy him. Subsequently disillusioned and in a drunken stupor, Aron joins the army. Adam runs to the train station just as Aron’s train is leaving and suffers a stroke. Lying in bed, Adam is close to death. Abra pleads with him to express some love to Cal before it’s too late. Adam responds by asking Cal to take care of him rather than his condescending nurse. Feeling loved and accepted by his father for the first time, Cal sits down next to Adam’s bed.

After the release of “East of Eden” Dean swiftly became an icon among young movie-goers as a symbol of teenage angst and rebellion. He would die in an automobile accident just six months after the film’s release. Julie Harris gives a wonderful performance. Kazan later gave her a great amount of credit for steadying the moody and mercurial Dean throughout the filming. The rest of the cast does a good job. Van Fleet won an Oscar for her portrayal, while Dean, Kazan, and screenwriter Paul Osborn were all nominated. Kazan specifically chose to dramatize the last third of Steinbeck’s novel because the conflict between father and son reminded him of his difficult relationship with his own overbearing father. I’ve had the Blu-ray version of “East of Eden” for quite a while, but I watched it for the first time only recently. It was a real pleasure watching this familiar movie in hi-def. This was Kazan’s first color film and it was also shot in wide-angle Cinemascope. Kazan and cinematographer Ted McCord took some successful risks and deliver an excellent film.

There are obviously many religious undertones in this film drawn very loosely from the Genesis narrative of Cain and Abel. Adam, the father, is a stern and pious Christian who wishes to impose his faith on his sons. Bible reading at the dinner table is a mandatory and joyless exercise. The message from atheists Steinbeck and Kazan is that what appears to be “good” (Adam and Aron) is not always good, and what appears to be “bad” (Cal) is not always bad. It’s no wonder the writer and director got it wrong. Too often we Christians present our faith as a joyless attempt to impose our morality on others. Better we should focus on spreading the Good News! of salvation by God’s grace alone, through faith alone, in Jesus Christ alone and humbly letting others know we are sinners saved by grace rather than taking the attitude of pious churchgoers looking down our noses at everyone else.