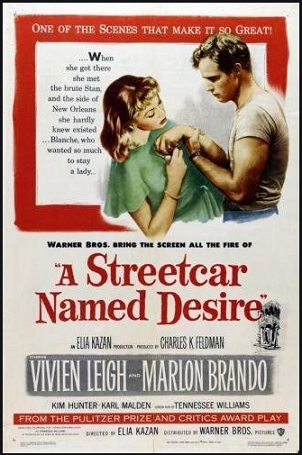 Today, as part of our “Kazan Redux” series, we’re going to re-review director Elia Kazan’s seventh film, “A Streetcar Named Desire.” As I re-watched “Streetcar” for this post, I thought about how viewers have been ambivalently fascinated and repulsed by this story for seventy years.

The review below was first posted on February 11, 2017 and has been slightly revised.

[Mitch confronts Blanche after he learns of her scandalous past.]
Mitch: I thought you were straight.
Blanche: Straight? What’s straight? A line can be straight or a street. But the heart of a human being?

By the late 1940s, Elia Kazan was widely acknowledged as one of the nation’s premier directors, both on Broadway and in Hollywood. Kazan had successfully staged Tennessee Williams’ play, “A Streetcar Named Desire,” which had a Broadway run of two years and had been awarded the Pulitzer Prize for Drama in 1948. When plans were being made to adapt the play to film, Williams pressed upon a reluctant Kazan to direct.

Completely out of other options, a frazzled Blanche Dubois (Vivien Leigh) arrives in New Orleans to stay with her sister, Stella (Kim Hunter) and brother-in-law, Stanley Kowalski (Marlon Brando), in their ramshackle apartment in the seedy French Quarter. The aristocratic and genteel Blanche is both repulsed by and attracted to the animalistic Stanley. A relationship soon blossoms between Blanche and Mitch (Karl Malden), one of Stanley’s few well-mannered friends. Increasingly annoyed by her condescending airs, Stanley learns of Blanche’s disreputable past and ends her relationship with his friend. Without any hope, Blanche is driven to madness and taken away to an asylum.

Movie theater audiences were stunned by “Streetcar.” Williams’ dark portrayal of humanity was definitely not typical Hollywood fare. And what about Brando’s performance? Audiences had never seen anything so brutally raw and realistic on the screen prior to this. “Streetcar” was nominated for twelve Oscars and three of the leads (Leigh, Malden, and Hunter) would win. Brando’s method-acting performance was just too shocking in 1951 to garner official recognition. But with “Streetcar,” Brando and Kazan had revolutionized acting and the American film industry. Kazan shot the film in much the same way the play was staged, with most of the action taking place in the Kowalskis’ decrepit two-room flat, but he added some on-location scenes shot at a bowling alley, a factory, and the New Orleans train station. Harold Stradling’s cinematography is excellent as is Alex North’s jazzy score. The American Film Institute twice selected “Streetcar” as one of the fifty-best American movies ever made (#45 in 1998, #47 in 2007).

Additional thoughts from a believer’s perspective

Many books and articles have been written about the meaning of Williams’ lyrical “Streetcar.” The characters aren’t meant to be actual people, rather they’re symbolic of humanity. Here we see the perennial conflict between “civilization” with its art, education, ceremonial religion, and social courtesies versus the baser instincts of dog-eat-dog survival. Yet, the refined Blanche is not all she pretends to be and Stanley is more than happy to confront her hypocrisy.

“Streetcar” was considered to be somewhat scandalous back in 1951, although it wouldn’t cause even a ripple on today’s prime-time television. As a believer in Jesus Christ, I’m a big fan of this film. Why? Because it shows people as they really are; sinners and hypocrites. Underneath the pretense. Without the sugar coating. Williams and Kazan don’t give you the Gospel in this movie, but they rub your nose in man’s “inhumanity” and sinfulness. I’ve read that the stunned audience stood and applauded the Broadway play premier for thirty minutes after the final curtain went down. But why were they applauding? Williams was holding up a mirror and showing them exactly who and what they were without Jesus Christ.

Blanche was desperately searching for a “safe harbor.” Without Jesus Christ, where do we go? Who will take us in? To whom can we turn?