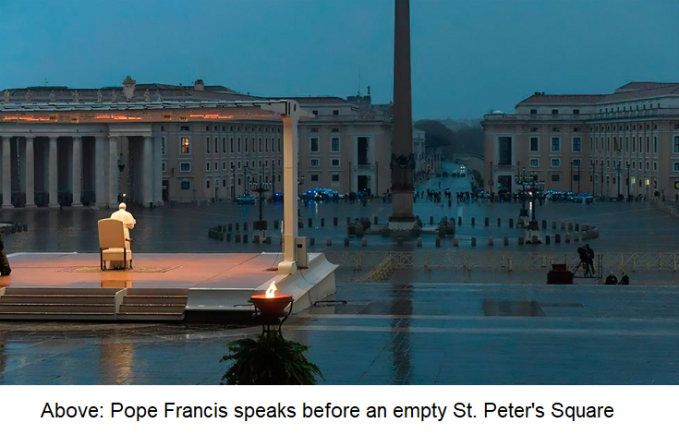 In the last several weekend roundups, we have been observing and discussing how the Roman Catholic church has been dealing with the COVID-19 pandemic. Roman Catholicism is a works-righteousness religious system, which teaches its members that they must receive the church’s sacraments in order to allegedly acquire graces that will enable them to obey the Ten Commandments (impossible!) and church rules in the hope of possibly meriting salvation at the moment of death. A religion comprised of compulsory sacramental rituals administered solely by its ordained clergy is paralyzed when access to the rituals is blocked. In reaction to the crisis, the Catholic church is scrambling in an attempt to offer sacramental “alternatives” (e.g., spiritual communion, general absolution, etc.).

What’s interesting about Catholicism is that while it demands that its members strictly adhere to its rules and rituals, it dichotomously grants that all non-Catholic religionists AND EVEN ATHEISTS are also able to merit Heaven if they nebulously and indefinably “follow the light they are given” and are “good.” That’s Universalism, folks, NOT Christianity.

On March 18th, the Italian daily newspaper, “La Repubblica,” published an interview with pope Francis regarding his thoughts on the COVID-19 pandemic. Among other things, Francis offered the following as “encouragement” in these challenging circumstances:

“We are all children of God, and He watches over us. Even those who have not yet met God, those who do not have the gift of faith, can find their way through the good things that they believe in. They can find strength in their love for their children, their family, their brothers and sisters. Someone might say: ‘I cannot pray because I do not believe.’ But at the same time we can believe in the love of the people we have around us, and there we can find hope.”

“But to all who did receive him, who believed in his name, he gave the right to become children of God.” – John 1:12

“Whoever believes in him is not condemned, but whoever does not believe is condemned already, because he has not believed in the name of the only Son of God.” – John 3:18

I learned of the pope’s remarks via the interesting 50-minute video below. In this Zoom podcast, originally posted on March 28th, Leonardo De Chirico, pastor and director of the Reformanda Initiative, along with Clay Kannard, and Reid Karr, both also members of the RI team, discuss, “Rosary, Indulgences & Humanism: How is Roman Catholicism facing the Coronavirus Crisis?”