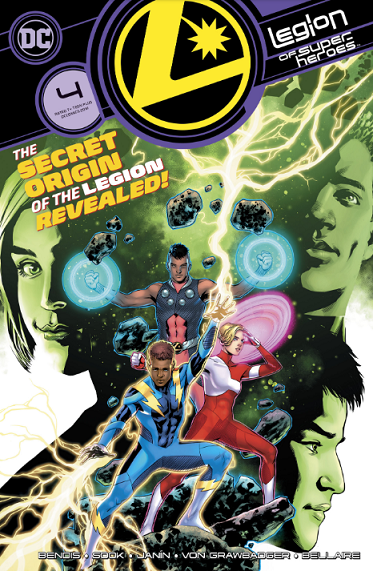 Last month’s LSH tale ended with General Nah’s incarceration, Aquaman’s trident being stolen, and a thoroughly confused Superboy FINALLY on his way to his Legion orientation. Let’s pick up the action in…

Superboy begins his orientation courtesy of Computo, the Legion’s AI (artificial intelligence) system. He is able to experience the memories of the founding members immediately prior to the establishment of the Legion:

As the three travel together to the Young United Planets headquarters on Earth, the U.P. President, R.J. Brande, appears and informs the trio she envisions a special role for them as personal counselors. However, an abrupt attack by Horrazian pirates ends the meeting – the Legion’s inauguration – and Computo also ends Superboy’s orientation because of pressing business; the remaining Legionnaires learn of the theft of Aquaman’s trident from one of the team’s vaults. As the contingent debates whether to allow Superboy to finish his orientation or to begin the hunt for the trident, the U.P. Science Police abruptly arrive and place the Legionnaires under arrest by orders of Madame President, Brande. When Superboy questions why the Legion’s former patron and benefactor is now opposing the team, Cosmic Boy informs him that the answer was in the second-half of the orientation.

Cosmic Boy, Saturn Girl, and Lightning Lad were the Legion’s founding members in the Silver Age, making their first appearance in the inaugural Legion tale in Adventure Comics #247 way back in April 1958. Bendis pays his respects to Legion tradition by presenting the same trio as founders in this latest LSH permutation. I’m anxious to find out what soured the Legion’s relationship with Madam President and where this Aquaman’s trident-storyline will end up. Great story with snappy dialogue. Great pencils and colors. Bendis, Sook, and Co. have done an excellent job to this point.