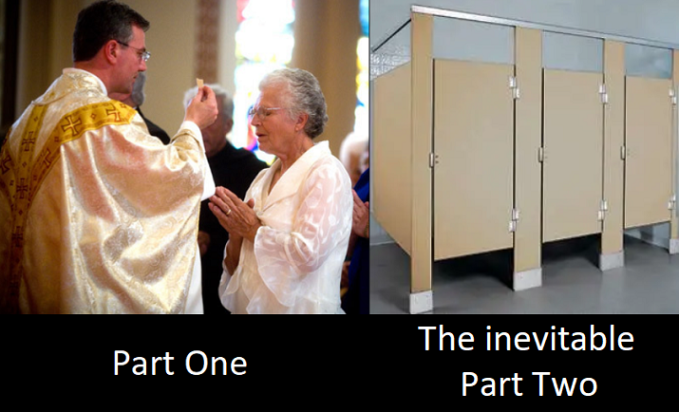 A short time ago in a weekend roundup comment, I referred to Catholicism’s obscure teaching regarding the alleged, 15-minute-only, limited presence of Jesus in communion that I’d like to expound upon a bit. This discussion gets a little messy by necessity so I apologize to those readers with very sensitive natures.

Roman Catholicism has catalog after catalog filled with its rituals, ceremonies, and traditions, but the most important of its rituals, by far, is the “celebration of the eucharist” at every mass. The Roman church goes so far as to proclaim that the eucharist (Greek eukharistia “thanksgiving”) is “the source and summit of the Christian life” (CCC 1324).

The RCC claims that during the eucharist portion of the mass, the priest transforms bread wafers and wine into the actual body and blood of Jesus Christ. This mysterious transformation is called transubstantiation. The priest then offers up the alleged Jesus wafers and wine as a sacrifice to God the Father for the sins* of the congregants and any others who are named, including the pope, the local bishop, souls in purgatory etc. The congregants then line up in the aisle to receive the Jesus elements from the priest. Catholics are taught the Jesus elements impart graces that enable them to resist sin and do good so as to hopefully merit Heaven at the moment of their death. The Roman church bases its transubstantiation doctrine on a hyper-literalist interpretation of John 6 and the Last Supper accounts in the gospels.

With that introduction, we can now get down to the (very) nitty gritty of this post. Let’s go back to the pious Catholic supplicant who received the Jesus wafer from the priest and placed it in his or her mouth. They return to their pew and kneel down on the kneeler, contemplating that they have just swallowed Jesus. What then? The Jesus wafer goes down the communicant’s esophagus and into their stomach where it is broken down by gastric acids. The particles/molecules then travel through the intestines where nutrients are absorbed. Any remaining matter is expelled through the colon and rectum.

Wait a minute! Do you mean to say that some of the Jesus wafer particles are expelled into the public sewer system and that the discharged Jesus matter from the Catholics in the community is mixed together with human excrement down at the local waste treatment facility? That sounds like a real problem. However, the Catholic catechism teaches that Jesus remains present in the wafer particles/molecules only for “as long as the Eucharistic species subsist” (CCC 1377), which is generally assumed to be about 15 minutes. Why 15 minutes? Why not 10 minutes? Why not 20 minutes? Who decided on 15 minutes? So after 15 minutes, Jesus allegedly leaves the eucharist particles/molecules and returns to Heaven, conveniently avoiding the messier parts of digestive waste elimination. What shall we call this process? De-substantiation? Have I coined a new term? There is very little official information from the RCC about this obscure, 15-minute subsistence dilemma. It’s another one of Catholicism’s “Pay no attention to the man behind the curtain” religious-calculus conundrums. Pious Catholics just go along with the program without thinking through the inevitable messy consequences of the transubstantiation rabbit hole.

Gospel Christians believe, as the Bible states, that communion/the Lord’s supper is a remembrance of how Jesus Christ gave His body and shed His blood as a propitiatory sacrifice for sin.

“And he took bread, and when he had given thanks, he broke it and gave it to them, saying, “This is my body, which is given for you. Do this in remembrance of me.” – Luke 22:19

Jesus defeated sin and death when He rose from the grave and He offers eternal life to all those who repent of their sin and trust in Him as their Savior by faith alone. Once again, Catholics get hung up on the physical/temporal rather than just believing the spiritual truth of receiving Jesus Christ as Savior by faith alone.

Postscript 1: Question: Since the Bible teaches that God the Holy Spirit already indwells all genuine believers, why would Roman Catholicism make such a HUGE deal about (allegedly) physically ingesting God the Son at Sunday mass every week? Answer: Because the eucharist/transubstantiation doctrine equates to tremendous control for the Catholic clergy.

Postscript 2: Catholicism claims the sacrifice of the mass is a “re-presentation” of Jesus’s sacrifice at Calvary, but the Bible says there is NO MORE sacrifice for sin.

“And every priest stands daily at his service, offering repeatedly the same sacrifices, which can never take away sins. But when Christ had offered for all time a single sacrifice for sins, he sat down at the right hand of God, waiting from that time until his enemies should be made a footstool for his feet. For by a single offering he has perfected for all time those who are being sanctified.” – Hebrews 10:11-14

Jesus Christ is now seated at the right hand of God the Father. He is NOT situated on Catholic altars as a broken host/victim.

For research purposes, see the Catholic article, “How long is Jesus present in the Eucharist after we’ve received Communion?”

80 thoughts on “De-substantiation? What happens to the Jesus wafer after it is swallowed?”