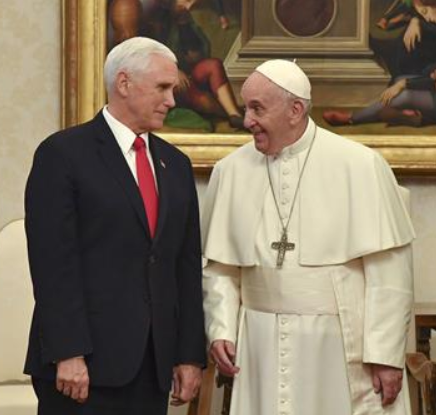 Vice President, Mike Pence (photo left), was brought up in a “devout” Irish-Catholic family and served as an altar boy at St. Columba Catholic church in Columbus, Indiana.  He claims to have accepted Jesus Christ as his Savior while in college and subsequently left the Roman Catholic church behind. However, Mr. Pence still believes the RCC is a valid Christian entity. Pence was overwhelmed when he met with pope Francis this past week, addressing him as “Holiness,” and profusely thanking him for a papal medal that he plans on re-gifting to his Catholic mother, which he claims will make him a “hero” in her eyes. Better that Pence should present the Gospel of grace to his mother (if he is in fact saved) and warn her to leave the Roman church with its false gospel of sacramental grace and merit. Pence does a disservice to lost Catholic souls and undiscerning evangelicals by compromising the Gospel.

One of the most bizarre aspects of Roman Catholicism is how the body parts of dead “saints” are regularly shipped all over the world to be venerated/worshiped by the credulous Catholic faithful.

Since the Second Vatican Council, the Roman Catholic church has been working unceasingly to regather the Protestant “separated brethren.”

While pope Francis is busy trying to regather Protestants under his “authority,” his progressive allies are telling the pope’s conservative Catholic critics to GET LOST.

Rochester Catholic bishop-emeritus, Matthew Clark, was the diocese’s bishop from 1979 to 2012. Numerous problem/pedophile priests were transferred from parish to parish during Clark’s tenure and many survivors correctly assume the former-bishop is indirectly culpable for the abuse they suffered. They want to question him in court, but he’s in the early stages of Alzheimer’s.

Many people incorrectly assume the Anabaptists were the precursors of today’s Baptists. The Baptist movement that we know today actually began in 1609 when minister John Smyth and his congregation broke away from the Anglican church over the issue of believer’s baptism, although there are some Baptist groups today, called Landmark Baptists, who believe they can trace their ecclesial lineage back to the New Testament church. While the Anabaptists of Luther’s and Calvin’s era held to believer’s baptism, they also subscribed to other doctrines that were pretty wacky.

There were 180,000 Catholic nuns in the United States in 1965, but now there’s only 31,350 and most of them are elderly.  These deluded women thought they could merit their salvation by turning their backs on their families and living a spartan existence with other nuns in convents. There are few things more cultish than a convent full of nuns, but the radicality of the institution was muted due to social conditioning.

Sports fans were overwhelmed by the accidental death of Kobe Bryant, the former Los Angeles Lakers basketball player, in a helicopter crash last Sunday. Eight others also died in the crash including Kobe’s daughter. Kobe was a practicing Roman Catholic who had attended mass just hours before the accident. The theology behind the Catholic mass contradicts the Gospel of salvation by God’s grace alone, through faith alone, in Jesus Christ alone on MULTIPLE levels. I don’t sit in judgement of Kobe’s soul, but the Bible judges the Catholic mass to be a spiritually deadly ritual of a false, pseudo-Christian church. See here and here. Referring to the above headline, Catholics seek redemption through their institutional church and its false gospel of sacramental grace and merit rather than through Jesus Christ.