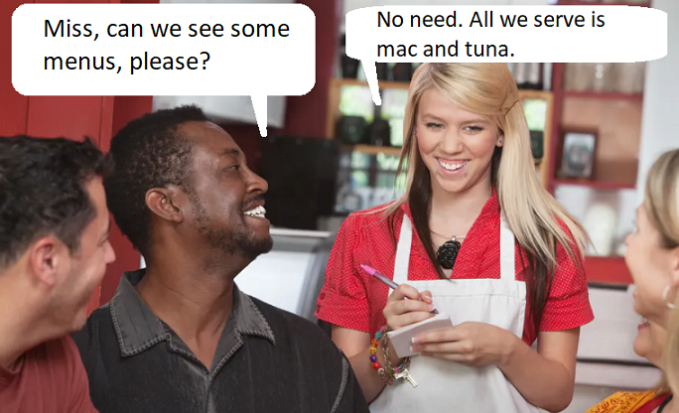 The outside thermometer is starting to drop, so it’s time to start talking about piping hot “comfort foods.” Below is my recipe for one of my favorite cold-weather meals; macaroni and tuna fish. Allow me to set the stage:

I grew up in a Catholic family way back in the days when the church forbade eating meat on Fridays year-round under threat of mortal sin.* Occasionally on Fridays, my Dad would pick up some fried fish and fries at Karl’s Fish Market at 1314 Culver Road in Rochester, but that was an expensive proposition with six hungry kids at home. More often than not, our non-meat Friday dinner was “macaroni and tuna fish,” aka “mac and tuna.” My Mom was not one to put a lot of effort into her cooking; it was all pretty basic stuff. Whereas most people, like my wife’s mother, dolled up this humble dish by sprinkling bread crumbs on top, baking it in the oven, and calling it “tuna noodle casserole,” my Mom characteristically served it “no frills” straight out of the saucepan.

Boy, I loved me some macaroni and tuna fish when I was a kid! I even dreamed of someday opening my own restaurant and serving nothing but mac and tuna. I confidently presumed it would easily be the most popular restaurant in town!

I still enjoy a hot bowl of mac and tuna and have fine-tuned the recipe over the years. My wife is strangely not a fan, but I’ll occasionally make it for myself. Enjoy!

For variety, you can add peas, diced onion, or diced celery.

*In 1966, the Vatican allowed the bishops of each country to collectively decide whether to continue mandatory abstention of meat on non-Lenten Fridays. The U.S. Conference of Catholic Bishops opted to discontinue the practice and issued a statement to that effect on November 18, 1966. Curious minds want to know what happened to American Catholics who had defiantly eaten meat on non-Lenten Fridays and died prior to November 18, 1996? Did the U.S. bishops issue them a “Get Out of Hell Free” card?