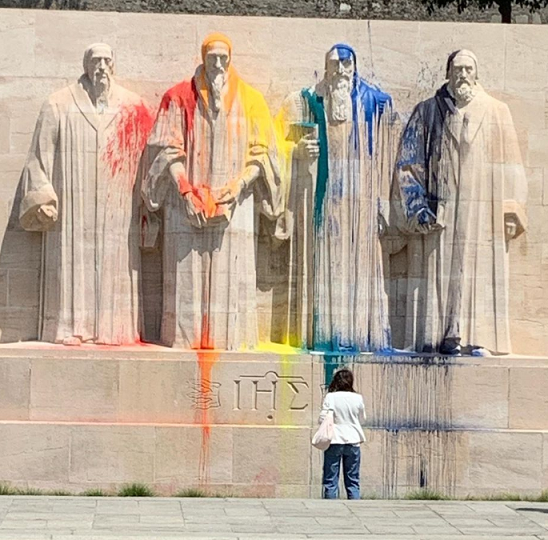 I somehow missed this news report from back in July about how LGBT radicals vandalized the Reformation Wall monument in Geneva, Switzerland with the requisite colors of the LGBT rainbow. LGBT activists will not rest until Gospel Christians deny/ignore the Bible’s teaching on homosexuality. As a side note, the men who are memorialized by the monument – John Calvin, William Farel, Theodore Bèze, and John Knox – would have strongly objected to being glorified in such a fashion.

Liberal Catholic prelates are using the current three-week-long Amazon synod at the Vatican to push their progressive reforms. The synod has featured some “interfaith” events promoting the syncretism of Catholicism and indigenous Amazon paganism that included pope Francis blessing statues of naked “Pachamama” Amazon fertility goddesses (see photo below). Some conservative Catholics, offended by the accommodations to the pagan idols, absconded with them and then unceremoniously dumped them into the Tiber River. Hmm, the Vatican is already home to thousands of idolatrous and blasphemous statues and paintings including many naked characters. What’s a few more? Can anyone imagine Jesus Christ or even the apostle Paul “blessing” pagan idols?

The U.S. Catholic bishops were counting on Hispanic Catholics to pick up the slack as non-Hispanic Catholics increasingly abandoned the church, but newly-released statistics show that Hispanics are also stepping off the legalistic religious treadmill.

The Vatican’s finances are once again under scrutiny. Expect this latest financial scandal to mushroom.

As pope Francis and his progressive allies pragmatically institute their liberal reforms in an effort to make the Catholic church more “relevant,” they bend Catholic doctrine to suit their agenda. Catholic conservatives, heretofore passionate defenders of the papacy, are caught in a dilemma from which they cannot extricate themselves.

Besides many other important doctrinal differences, Gospel Christians and Roman Catholics are irreconcilably opposed in regards to the doctrine of justification. Catholics claim souls are justified by sacramental grace and subjective sanctification, i.e., actually becoming intrinsically “good enough” to merit Heaven. Gospel Christians proclaim the Biblical teaching that souls are justified only by the perfect righteousness of Jesus Christ, imputed to them at the moment they accept Christ as their Savior by faith alone. Despite the accommodations and compromises of modernist mainline “Protestant” denominations, the Reformation continues. Unfortunately, Christians who attend “seeker-friendly” McMega churches hear very little (or nothing at all) about the Reformation or comparative theology.