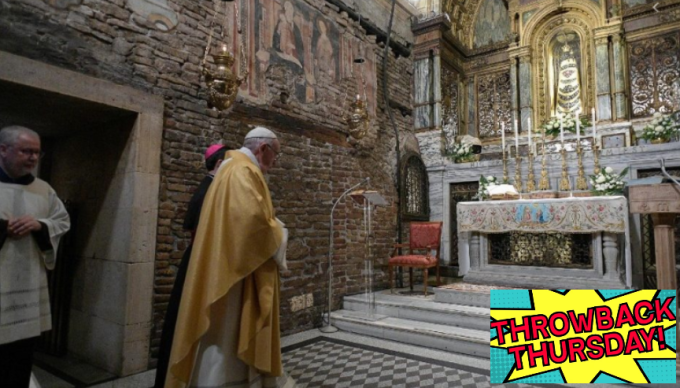 Photo above: Pope Francis inside the alleged “Holy House of Loreto”

Welcome to this week’s edition of “Throwback Thursday.” For today’s installment, we’re going to revisit a post that was originally published back on July 31st, 2015 and has been revised.

As early-Christianity became increasingly institutionalized and began to adopt many of the elements of paganism, there was a frenzied race to acquire items mentioned in the Bible, including the alleged personal effects of Jesus and his family. Centuries before scientific authentication, churches vied against each other for the most spectacular “relics.” Making their appearance, sometimes at multiple sites, were pieces of the “true cross,” the crown of thorns, the water pots of Cana, the crib of Jesus, the baby clothes of Jesus, Jesus’s foreskin, Joseph’s carpenter tools, the cup used at the Last Supper, the empty purse of Judas, Pilate’s basin, nails from the cross, Mary’s breast milk, etc., etc. The focus of Catholicism has always been on the created rather than the Creator (Romans 1:25).

Perhaps the most audacious claim for a relic (besides Jesus’s “Holy Prepuce,” i.e., foreskin) is the alleged Holy House of Nazareth located inside the Basilica at Loreto, Italy. Catholic tradition claims Mary grew up in this small 13′ by 31′ stone house and that Jesus was raised in it, also. According to Catholic tradition, angels carried the house from Nazareth in Palestine to Tersatto, Croatia in 1291. Not content with that site, the angels moved the house to Recanti, Italy and finally to Loreto in 1295.

Lest anyone think the grizzled Catholic hierarchy just winks at this ridiculous myth, popes “saint” John XXIII, Benedict XVI and Francis (above photo) have visited the house, signifying their stamp of approval.

Postscript 1: Modern Catholic revisionists understood the sheer ridiculousness of the Holy House of Loreto myth and have concocted a more plausible explanation, positing that a mysterious aristocratic family, the “Angelos,” sponsored the physical relocation of the house from Palestine to Europe, which gradually gave rise to the popular myth of “angels” flying the house over the Mediterranean.

Postscript 2: I noticed that our library recently acquired “The Miraculous Flying House of Loreto: Spreading Catholicism in the Early Modern World” (2019) by Karin Vélez. I put a hold on this book and will be reading it soon.

Below is a six-minute video providing some of the faux history of the “Holy House.”