Welcome to this week’s “Throwback Thursday” installment! Today, we’re revisiting a post that was originally published back on July 20, 2015, and has been slightly revised.

I’ve heard of “The Flying Nun” but has anyone heard of flying priests? ABC’s “The Flying Nun” television comedy ran from 1967 to 1970 with Sally Field starring as Sister Bertrille, the young, 90-pound nun who was often levitated by the strong tropical breezes of San Juan, Puerto Rico (where her convent was located) that lifted her up into the air by her highly-starched cornette (see photo above). Wow, that nun must have had neck muscles like aircraft cables! Few, if any, shows in the history of television have had a more ridiculous premise.

But Sister Bertrille wasn’t the only Catholic flying around the atmosphere. The Catholic church claims quite a few of its “saints” were prone to levitate while in contemplative, rapturous swoons. Below is an incomplete list of “frequent flyers” from Catholic sources:

Perhaps the “saint” most famous for levitating was Franciscan friar, Joseph of Cupertino (1603-1663). It’s claimed that Pope Urban VIII witnessed Joseph’s levitations firsthand when the friar visited the Vatican. Did these people actually float or are these just more Catholic “sacred tradition” folk tales? The Bible records that Jesus and Peter walked on water and that Jesus ascended into Heaven, but there’s no other mention of any other kind of “levitation” in the New Testament. Levitation has long been a staple of pagan religions and is cited as a frequent phenomenon in cases of demonic possession. Joseph of Cupertino and the others mentioned were Catholic “mystics” who deprived themselves of food, water, sleep, and other necessities and normal comforts in an effort to enter into a psychological state of religious ecstasy/euphoria/hysteria. These “mystics” lived in a society dominated by religious superstition. Why do we not hear of any verifiable cases of levitation among Catholic priests or nuns today?

Catholicism is overflowing with fanciful tales and legends of religious miracles, but proclaims a false gospel of salvation by sacramental grace and merit. Pay no attention to the “bright lights” of false “mystical” spiritualism/experientialism and heed the Biblical Gospel of Grace! Repent of your sin and accept Jesus Christ as your Savior by faith alone and ask the Lord to lead you to an evangelical church where the Gospel is preached without compromise! 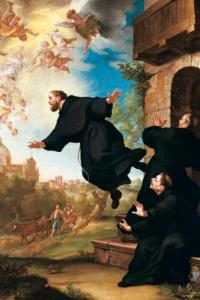