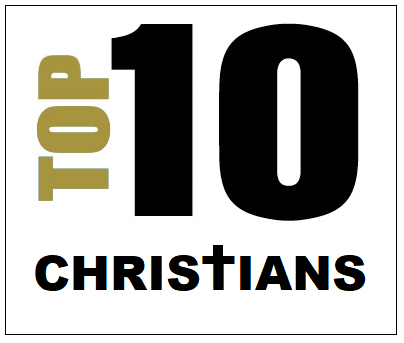 Yes, it’s time to rank the Top Ten Christians of all time. So without any further ado, let’s get started:

What? A blank list of the “Top Ten Christians of All Time”? Yup, and you probably already know where this post is going.

A couple of Sundays ago, I was walking out of one of our local grocery supermarkets and a headline on the front of the local Sunday newspaper caught my eye; “Buffalo Bills: Who are the Top 100 players in franchise history?” We’re headed toward the start of the NFL football season and Rochester is in the middle of Bills country, so a headline like that is a good ploy to sell newspapers.

Unbelieving culture always tends to think in terms of Top Ten or Top 100 lists and who or what is the best at some particular occupation or function. It’s a competitive world out there and people are always trying to be at the head of the pack because that translates into prestige and $$$.

But Christians know that Jesus Christ was quite counter-cultural in His teachings.

Jesus came to save and to serve and exhorts those He has saved to also serve others in many ways, but most importantly, by giving out the Gospel to the lost. There are none who are righteous, according to the Bible, and saved souls do not have a single plea of their own except for the imputed, perfect righteousness of their Savior, Jesus Christ. A list of “Top Ten Christians” is really a contradiction in terms.

The world’s Top Ten and Top 100 lists can be interesting and even helpful in a practical way when it comes to the most effective, reliable, and pleasing consumer products, but the rankings of people according to some scale of greatness should ring hollow to a believer. All talents and capabilities are gifts from the Lord.

Now, there are some religious groups that do boldly lift certain people up as “great.” Roman Catholicism, for example, canonizes certain people as “saints,” meaning they allegedly achieved an extraordinarily high level of sanctity in their lifetime. There are unofficial lists of the church’s greatest saints and greatest popes, but that type of thinking follows worldly models rather than the humble example of Jesus Christ.

Regrettably, there are times when genuine believers ape the world’s thinking and exalt certain pastors or para-church leaders in the same way the world exalts its movie star celebrities. We should avoid puffing up others or ourselves with pride.

4 thoughts on “The Top Ten Christians of All Time!”