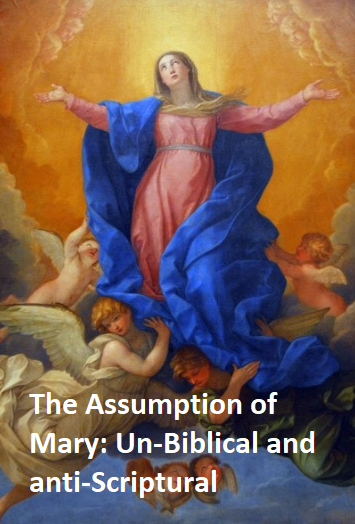 This past Thursday, Roman Catholics celebrated the Feast of the Assumption, the dogma that Mary was assumed bodily up into Heaven either at the moment of her death or immediately prior to her impending death. This belief was defined as an infallible dogma by pope Pius XII in 1950, meaning any Catholic who refuses to believe the teaching commits a soul-damning mortal sin. The feast or “solemnity” is a holy day of obligation (HDO), meaning all Catholics were required to attend mass last Thursday under threat of mortal sin. How many actually did attend mass on Thursday? RCC statistics reveal that only 12% of Catholics attend all HDOs as required.

There is nothing in the Bible to support the notion of Mary being assumed into Heaven and there is no extant mention of it until the writings of “saint” John Damascene in the 8th century. So how did the belief come about? Catholic theologians who favored worship/veneration of Mary extrapolated the doctrine using the “fitness” principle. Their argument was as follows: A) since Mary was supposedly sinless (immaculately conceived and without sin after her birth), then B) it was only “fitting” that God would not allow her body to experience the ravages and corruption of death, and so C) God assumed her into Heaven. This “fitness” principle that underlies many un-Biblical Catholic traditions was later popularized by medieval theologian, Thomas Aquinas. See here. On Thursday, pope Francis proclaimed that Mary is the “Gate of Heaven.” The RCC has taught for a millennia that all of God’s graces first flow through Mary and that she is therefore the co-mediator, along with Jesus, between God the Father and mankind. However, Mary was a sinner saved by God’s grace through faith in Jesus Christ alone and she would be sorely grieved to know any worship (aka veneration) was being directed towards her.

Somehow, I missed this story when it first came out on July 3rd. This is just the tip of the iceberg, folks.

It was initially reported at the end of July that 50% of U.S. Catholics don’t believe the consecrated eucharistic elements are the actual body and blood of Jesus Christ as their church teaches. Follow-up articles report that the percentage is actually much higher; 69%! Transubstantiation, the doctrine that Catholic priests change bread wafers and wine into the actual body and blood of Jesus, to be ingested as a conveyance of grace, is one of the prime teachings of Catholicism. Catholics generally have sparse knowledge of their church’s teachings and are even less knowledgeable about the Bible.

As this article states, the Catholic church “was the first and largest corporate slaveholder in the Americas.” As I’ve read elsewhere, the largest slave owners in antebellum Maryland were the Jesuits. How could the alleged Holy Spirit-led “vicar of Christ,” have allowed his subordinates to buy, sell, and subjugate slaves? But in light of the murderous papal-approved Inquisitions, the buying, owning, and selling of slaves by Catholic religious orders was just more of the same.

This past Wednesday, August 14th, was the commencement of the one-year window created by the 2019 Child Victim Act of New York State whereby survivors of priest sexual abuse are able to sue the Catholic church with no limitation statutes. As of this posting, 37 lawsuits have been filed in Rochester and 105 were filed in nearby Buffalo along with hundreds more throughout the state.

My wife and I participated in one of our church’s small groups for two years, but we had several ongoing disagreements with some of the other group members regarding such topics as the syncretism of Christianity and nationalism that’s popular among American believers, ecumenism with the Catholic church, and the credibility of TBN hoaxsters, er, I mean, “televangelists.” Two of the group’s members stated that their only daily Bible reading was from a Joyce Meyer “devotional.” Many pastors aren’t willing to take a stand these days and the sheep drift into error.