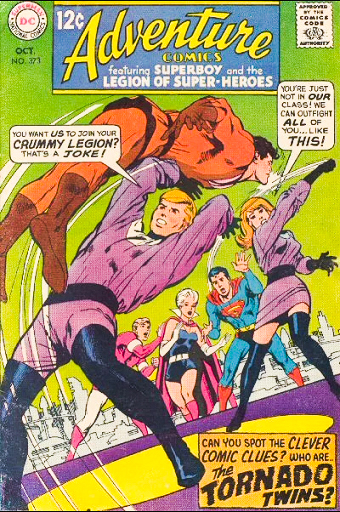 Yes, my friends, it’s time to once again climb into our fictional time machine and travel to the 30th-Century for another adventure from DC Comics’ Silver Age with the Legion of Super-Heroes in…

Seven of the Legionnaires – Brainiac 5, Element Lad, Karate Kid, Phantom Girl, Princess Projectra, Sun Boy, and Superboy – are enjoying various recreational activities when they’re suddenly summoned to a robbery in progress. However, when they arrive at the crime scene they discover the criminals have already been apprehended by a brother and sister, super-hero duo with the last name of “Allen.” Hmm, we may already know where this one is headed, right JLA fans? The Allen twins, Don and Dawn, smugly gloat about beating the Legion to the punch, which leads to a heated exchange between Don and Karate Kid.

The Legionnaires return to their headquarters with their tails tucked between their legs, but are soon called to another emergency; some worker robots have gone haywire at an iron mine, causing a partial cave-in and trapping some V.I.P. visitors. The Legionnaires confront the powerful robots, but are quickly overcome. The Allen twins show up, thrash the robots and save the visitors. The puzzled Legionnaires search for information about the mysterious twins, but find nothing unusual as the Metropolis media celebrates the new heroes and pronounces the Legion as “has-beens.”

Like beating a dead horse, the Legion is called to a third emergency at a chemical plant and are once again upstaged by the twins. Heated words are again exchanged between Don Allen and Karate Kid, which quickly escalates into an all-out rumble between the seven Legionnaires and the twins, with the Allens leaving the seven bloodied and battered. Does anyone else see a pattern developing here? Public confidence in the Legion is at an all-time low and still plummeting.

The Legion is then sent a, gulp, fourth emergency signal, but the heroes’ confidence is so shaken that they initially opt to stay inside their headquarters. However, they soon reconsider and investigate a seemingly-hostile alien spaceship parked in the middle of Metropolis. Yet, when they force their way inside the ship, they find a giant statue of the 20th century super-hero, the Flash aka Barry Allen. Don and Dawn soon arrive and explain they are descendants of Barry Allen and were artificially endowed with the Flash’s powers on a temporary basis in order to publicize the United Planets’ upcoming commemoration of “Flash Day.” After twenty-two pages of bitter acrimony, everyone suddenly shakes hands and goes about their business. Ugh!.

Aside from the pitiful “The Revolt of the Super-Pets” (Adventure Comics, 364), this issue might be the hokiest Legion tale we’ve reviewed to this point. A “Flash Day” in the 30th century? C’mon! Seriously? The feigned animosity featured in this story was a well-worn plot device in DC’s Silver Age-era. Win Mortimer’s pencils are a step down from Curt Swan’s, but still much better than latter-day Legion artwork. It’s great to see Element Lad in a story for a change. For some strange reason, he was one of the least-featured Legionnaires. Maybe it was the pink leotards?

8 thoughts on “A Legion Clunker”