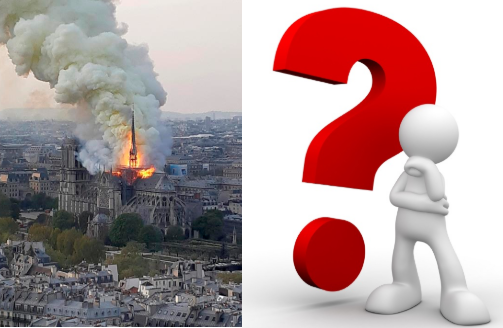 It’s been over one week since the massive fire at the Notre Dame Cathedral in Paris, France, and I thought I would follow-up with a few observations and questions:

Once again, I don’t applaud the destruction of property or the endangering of human life, but I certainly don’t have any sad feelings about the conflagration at Notre Dame. Over a span of 800 years, millions of souls attending Notre Dame have been fed a false gospel of sacramental grace and merit.

The huge outpouring over Notre Dame is actually an interesting statement about the current state of the Catholic church and institutional religion in general. The majority of baptized Catholics no longer pay attention to the rigors and rituals of their works religion, but their membership in the institutional church and its monuments still have some significance for them, if nothing more than serving as sentimental familial and “tribal” identifications/connections.

*The New York Times was derided for misinterpreting reports of the “body of Christ” being saved at Notre Dame as a statue of Jesus rather than the consecrated Jesus wafers. See here. Of course, the Catholic church’s claim that the consecrated bread wafers are actually Jesus is the MUCH MORE serious error.