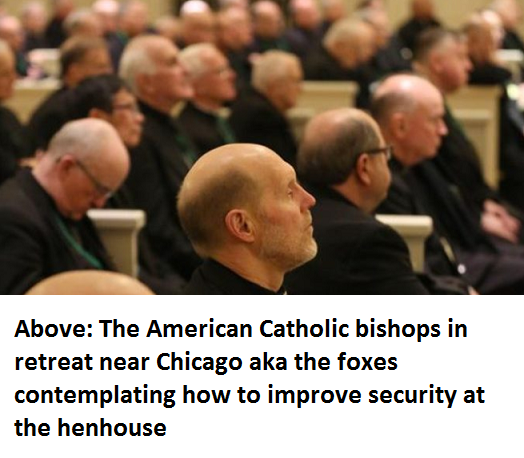 Last weekend, I mentioned that the American Catholic bishops were meeting outside of Chicago to mull over the sexual abuse and cover-up scandal tsunami that’s wracking the Catholic church. Next stop? The American bishops are scheduled to meet with all of the church’s bishops from around the world at the Vatican from February 21 to 24 to come up with some type of comprehensive plan to address the scandal. That is like putting Al Capone in charge of the Neighborhood Watch committee. Sexual abuse has been a “problem” within the Catholic church for centuries due to its mandatory rule of celibacy for clerics that has both attracted and fostered deviancy.

Seventy-years ago, back when the Catholic church was still religiously and politically militant, such a large number of Catholics in Congress would have been a concern. These days, most of these Catholic legislators are nominal/cultural Catholics at best, e.g., Nancy Pelosi, Dick Durbin, Kirsten Gillibrand, Tim Kaine, etc.

Pope Francis is using cardinal Reinhard Marx and liberal German bishops as the vanguard for his progressive reforms.

Catholics love to boast that they have an infallible pope leading their church, although Catholic theologians can only agree on the infallibility of three papal declarations: the immaculate conception of Mary in 1854, papal infallibility in 1870, and the assumption of Mary in 1950. What’s the use of having an infallible pope if they never declare anything as dogma? Ironically, Catholic conservatives believe that everything the current pope has to say is not only fallible, but should be ignored.

Pope Francis’ progressivism is fueling a renaissance of pre-conciliar, militant traditionalism. Not all that long ago the Catholic church taught that only baptized Catholics had a chance of going to Heaven. These days, pope Francis says even atheists can merit Heaven if they are “good.”

I’m not happy to see this series coming from DC Comics, but caricaturizations of Jesus and Scripture are nothing new.

More than a few new Christians have enthusiastically resolved to read the Bible from cover to cover only to run into Leviticus, Numbers, and Deuteronomy and become discouraged. It’s really helpful to use some Bible study aids (commentary and Bible dictionary) when reading those books.

Prosperity gospel scammers like Meyer make a shamefully grandiose living off of people’s greed – “Send in your ‘seed faith’ money so that you can also receive your financial blessing.”