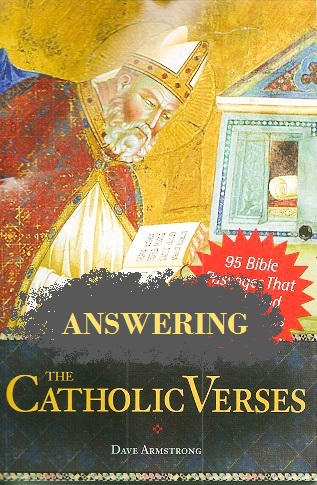 Today, we will continue with our response to Dave Armstrong and his book, “The Catholic Verses,” in which the Catholic apologist presents ninety-five Bible verses or passages that allegedly validate Catholicism and are claimed to “confound” Protestants.

In the next chapter, Armstrong presents several verses/passages, which he believes support Catholicism’s doctrine of penitential suffering. This week, we’ll focus on the first two passages he introduces:

#73) Philippians 3:10: “…that I may know him and the power of his resurrection, and may share his sufferings, becoming like him in his death.”

#74) Romans 8:17: “…and if children, then heirs, heirs of God and fellow heirs with Christ, provided we suffer with him in order that we may also be glorified with him.”

Beneath these passages, Armstrong chides his Protestant readers, “one brand of Pentecostal ‘name it, claim it’ Protestantism, which asserts that believers can have whatever they like merely by having enough faith  to ‘claim it’…(tries) to pretend that suffering is foreign to the Christian life…(and) ignore(s) this crucial aspect of (Romans 8).” Armstrong continues, “Most Evangelicals do not take it that far, yet still minimize the place of suffering, and hence, of the related notion, penance.” – p. 128.

Armstrong then goes on to present the Catholic position, that a person can offer up their physical sufferings to God as a penance/atonement for their own sins or for the sins of others.

In rebuttal, we find that Scripture exhorts all born-again followers of Jesus Christ to count it all joy when we when we meet trials of various kinds. “For you know that the testing of your faith produces steadfastness. And let steadfastness have its full effect, that you may be perfect and complete, lacking in nothing.” – James 1:2-4.

But are believers to seek out and even self-inflict suffering upon themself as a “penance” for sin as Catholicism teaches?

Hebrews 12:3-13 gives us an excellent perspective on trials and suffering:

“3 Consider him who endured from sinners such hostility against himself, so that you may not grow weary or fainthearted. 4 In your struggle against sin you have not yet resisted to the point of shedding your blood. 5 And have you forgotten the exhortation that addresses you as sons? ‘My son, do not regard lightly the discipline of the Lord, nor be weary when reproved by him. 6 For the Lord disciplines the one he loves, and chastises every son whom he receives.’ 7 It is for discipline that you have to endure. God is treating you as sons. For what son is there whom his father does not discipline? 8 If you are left without discipline, in which all have participated, then you are illegitimate children and not sons. 9 Besides this, we have had earthly fathers who disciplined us and we respected them. Shall we not much more be subject to the Father of spirits and live? 10 For they disciplined us for a short time as it seemed best to them, but he disciplines us for our good, that we may share his holiness. 11 For the moment all discipline seems painful rather than pleasant, but later it yields the peaceful fruit of righteousness to those who have been trained by it. 12 Therefore lift your drooping hands and strengthen your weak knees, 13 and make straight paths for your feet, so that what is lame may not be put out of joint but rather be healed.”

It’s clear from the above passage that the Lord uses persecution and trials to discipline the believer and conform them into the image of Jesus Christ. However, there is absolutely nothing in Scripture about offering up sufferings as penance for one’s self or others. That is a Catholic fabrication. Jesus paid for all sin on the cross at Calvary. What everyone must do is repent of sin and accept Jesus as Savior by faith alone.

Catholics have become obsessed with suffering as a means to expiate their sins (aka “redemptive suffering”). Not only do they offer up sufferings that they encounter naturally, they seek out additional suffering through the practice of “self-mortification.” Catholic “saints” down through the centuries have engaged in such practices as sleeping on the floor, wearing hair shirts or other uncomfortable devices, self-flagellation, fasting to the point of illness and death, depriving themselves of sleep, etc. Lest you think only medieval Catholics practiced these things, pope John Paul II was known to flagellate himself daily and mother Theresa wore a pain-inducing “cilice” (see here) every day. Ecumenical evangelicals might be shocked if they saw how pain-inducing, penitential self-mortification was/is a regular staple of Catholic piety.

Where did Catholicism get this idea of pain-inducing self-mortification? From pagan religiosity:

“28 And they (the false prophets of Baal) cried aloud and cut themselves after their custom with swords and lances, until the blood gushed out upon them. 29 And as midday passed, they raved on until the time of the offering of the oblation, but there was no voice. No one answered; no one paid attention.” – 1 Kings 18:28-29

Christians are able to find joy and peace in all circumstances through the grace of our Lord, but suffering does not cleanse the punishment for sin from anyone, and to purposely seek out physical suffering is an evil and gross misinterpretation of Scripture.

All Christians will suffer in this world and we will suffer even more the closer we follow our Lord; through mockery, ridicule, and even physical persecution, but suffering does not merit salvation.

For more on the role of suffering in the life of a believer, see the article below:

Suffering Prepares Us for Glory
https://www.gty.org/library/sermons-library/90-174/suffering-prepares-us-for-glory