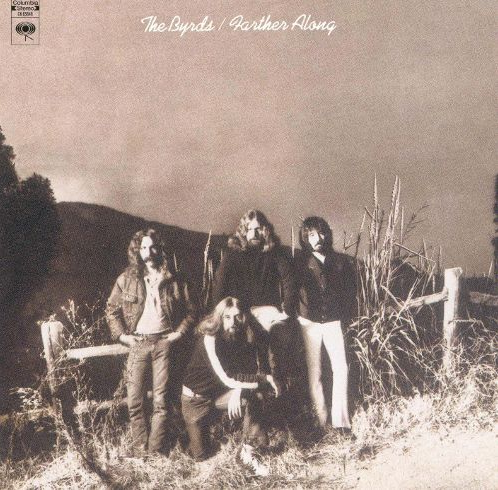 The last album of the McGuinn-White Byrds borrows the name of a Gospel hymn for it’s title.

Farther Along
The Byrds
Produced by The Byrds, Columbia Records, Released November 17, 1971, Length 32:02

Deeply annoyed with the heavy orchestration and gospel choir backup vocals added by producer, Terry Melcher, to their previous album, “Byrdmaniax,” Roger McGuinn and his ersatz Byrds hired hands (Clarence White, Gene Parsons, Skip Battin) were anxious to record a simpler, pared down response. The band self-produced the eleventh Byrds album, “Farther Along,” while touring in England in July 1971, only one month after the release of “Byrdmaniax.”

Several of the songs on “Farther Along” featured a 1950s rock-and-roll theme. There’s very little to recommend about this album. In my opinion it’s the Byrds’ worst effort. After the release of this album, as the McGuinn-White Byrds sputtered to an end, McGuinn would fire drummer Parsons in July 1972 (to be replaced by John Guerin and others) and bassist Battin in mid-February, 1973. McGuinn officially dissolved the McGuinn-White Byrds just prior to the March 1973 release of the reunion album from the five founding members.

Next month we will review the Byrds’ final album, the 1973 reunion misstep recorded by the five original founding members of the band.