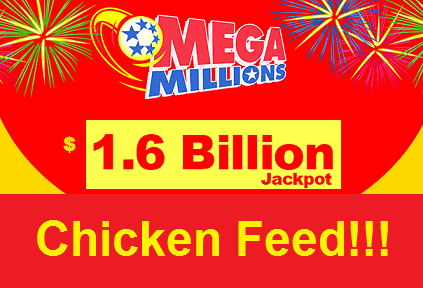 In case you haven’t heard the news around the water cooler the past couple of days, the jackpot for the Mega Million Lottery has risen to a record $1.6 billion and the drawing is tonight.

Despite the daunting 1-in-302-million odds of winning, people will be queueing up at their favorite lottery outlet today to buy a ticket. Afterwards, they’ll be kibitzing enthusiastically with their friends, family, co-workers, and even total strangers about all of the things they are going to do and buy with that $1.6 billion (actually only $904 million after Uncle Sam takes his share).

I have a few thoughts:

I won’t be joining the line to buy a Mega ticket today. Don’t want one. Don’t need one. I’m not rich according to the standards of this world, but I have a Father who owns every hill and every valley. Thank you, Jesus!

“Two things I ask of you; deny them not to me before I die: Remove far from me falsehood and lying; give me neither poverty nor riches; feed me with the food that is needful for me, lest I be full and deny you and say, ‘Who is the Lord?’ or lest I be poor and steal and profane the name of my God.” – Proverbs 30:7-9