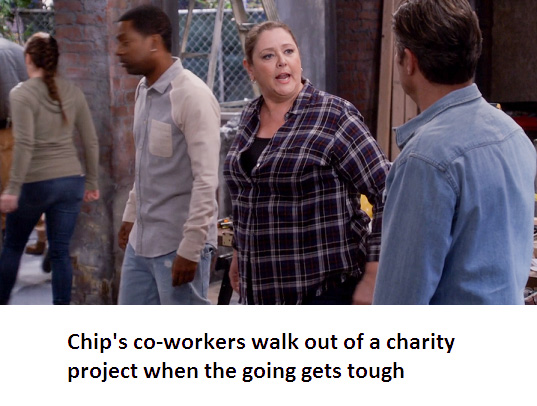 Today, we’re going to review the next-to-last episode of the cancelled CBS sit-com, “Living Biblically.” The premise of the series is that the main character, Chip, a Roman Catholic and self-professed “good” person, desires to be an “even better” person by following the Bible literally. The show is in sync with the “good people go to Heaven” philosophy and at odds with the Biblical message of man’s total depravity and the Good News! of salvation by God’s grace through faith in Jesus Christ alone.

Living Biblically
Episode 12, “It’s Better to Give Than to Receive”
CBS, originally aired 7/14/18

Chip’s boss, Ms. Meadows, calls the staff at the newspaper together to kick-off the annual charity effort, “Koaster Rides 4 Kids,” at a Six Flags amusement park, the idea being that employees sign up sponsors to donate a dollar amount for every time they ride the roller coaster. What a sacrifice! Chip meets with his “God Squad” at the local tavern to enlist their support, but priest Gene and rabbi Gil balk at such a cheesy concept. Priest Gene suggests instead that the newspaper staff help fix up a family residence in his parish that was damaged by fire. Chip pitches the idea to his workmates and they grudgingly accept.

Saturday morning, everyone shows up at the worksite, but their enthusiasm wanes quickly due to the hard work involved. They decide a day at Six Flags would be more enjoyable and stage a walkout, leaving behind Chip and his wife Leslie, Gene, and Gil. Priest Gene was hoping the family would be able to move back into the repaired house on Sunday, but the walkout foils those plans.

At Six Flags, the deserters begin to have second thoughts about their selfish behavior. The story ends on a happy note as everyone returns back to the house to continue repairing the structure.

The Bible says even our good deeds, including our charitable efforts, are like filthy rags.

“But we are all like an unclean thing, and all our righteousnesses are like filthy rags.” – Isaiah 64:6

Everything we do is tainted by sin, even our charitable giving. For example:

There’s a gentleman who made quite a fortune in the Rochester area who has contributed massive amounts of money to the construction of several new educational and medical buildings in town. Not surprisingly, all of the buildings bear his name.

This episode does an interesting job of examining people’s less-than-altruistic motives behind their charitable efforts, but it leaves out the most important spiritual lesson. We are all depraved sinners in need of the Savior, Jesus Christ. We can’t reform ourselves unto salvation. All of us are sinners and fall short of God’s glory. Repent of your sin and accept Jesus Christ as your Savior by faith alone.

5 thoughts on “Living Biblically, Episode 12: “It’s Better to Give Than to Receive””