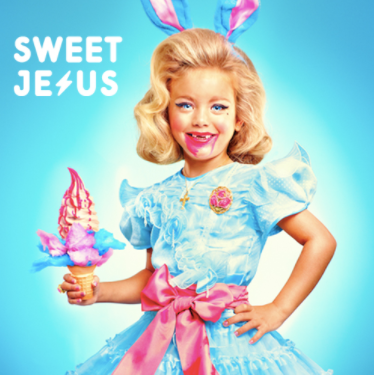 A controversial Canadian ice cream chain named “Sweet Jesus” has a location in Baltimore and is planning to open several more outlets in the U.S. This “edgy” company uses blatant Satanic imagery (photo above) to appeal to its “edgy” customers. See here for more examples. No doubt you are taken aback by the accompanying photo and the others shown in the linked article, but this stuff is rolling your way. My shaky memory prevents me from giving proper credit to the person who first alerted me to this several weeks ago.

Our illustrious governor, Andrew Cuomo, recently spoke at a Baptist church attended by African Americans, telling the congregants, “I want you to know as a matter of full disclosure, I am a Catholic. Catholics basically believe the same teachings that Baptists believe. We just do it without the rhythm. But we try. We are not as without rhythm as some of our Jewish brothers and sisters.” This is so wrong on so many levels. Besides the bigoted overtones, Catholics do not basically believe the same teachings that Baptists believe, if those Baptists uphold the Gospel of salvation by God’s grace through faith in Jesus Christ alone. Sadly, many of the Baptist churches up here in the Northeast lapsed into social gospel/modernism long ago

We can anticipate less and less tolerance for Bible believers.

Back on March 2nd, I posted a news story about a priest in nearby Buffalo who admitted to abusing “dozens” of boys. See here. That story broke open the floodgates and shortly afterward the Buffalo diocese released the names of 42 more priests facing allegations of sex abuse. It’s a snakepit, folks.

Francis Chan warns us not to criticize church leaders? This is the same Francis Chan who rebuked Mike Gendron after Gendron gave an objective presentation of Roman Catholic beliefs at Chan’s former church? See here. Yes, believers are admonished to support faithful shepherds, but we are also admonished to be watchful for false teachers and compromisers of the Gospel.

There are two ways to look at the Ten Commandments. One way will lead to hell and the other way will help lead you to Heaven. Most see the commandments as a moral code that they must successfully obey in order to merit Heaven when they die. But only Jesus was able to obey the Law. The Bible says the Ten Commandments were given as a mirror to show us exactly how sinful we are (James 1:23-25) and just how much we need the Savior. After a person accepts Christ, they are to follow Him as Lord in obedience, albeit imperfectly.

Mother Angelica aka Rita Rizzo founded Eternal Word Television Network (EWTN), in 1981 to propagate conservative Catholic teaching. The Catholic church likes to parlay popular Catholic celebrities to “sainthood” in short order. The official waiting period for the canonization process is five years, so expect the gears to start turning very quickly for Mother Angelica in 2021. Millions have been led into spiritual darkness by Rita Rizzo and her media conglomerate.

Pope Francis has defied “infallible” Catholic teaching on other doctrines so it’s entirely plausible that he may have conjectured to his atheistic journalist friend that he doubts the existence of hell.

Catholic sources report only 20% of American Catholics attend obligatory mass every Sunday, but the U.S. bishops anticipate large crowds this Easter Sunday. These “chreasters” (Christmas and Easter-only attenders) are all going to hell according to their church for defying the mandatory weekly attendance rule, but those folks are hoping God is “grading on a curve.” None of these Catholics, sticklers or semi-lapsed, are going to hear the Gospel of salvation by God’s grace through faith in Jesus Christ alone preached from Catholic pulpits this Sunday.

Every Good Friday, Filipino Catholics engage in self-flagellation parades and some even allow themselves to be crucified. This would “strike” most contemporary Catholics as way too extreme, but self-mortification including flagellation was quite the rage among Catholics during the Middle Ages (see here) and even among the clergy and religious orders up until recent times. It was reported by Catholic sources that pope John Paul II regularly whipped himself as an act of penance. See here.