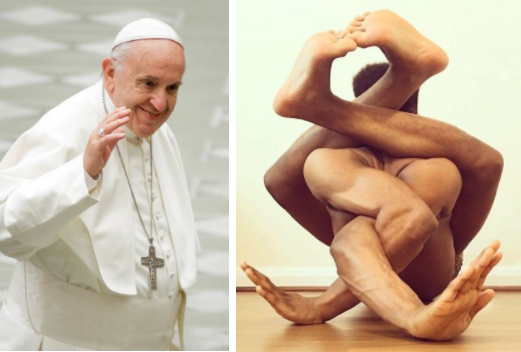 Last week, I posted a message about the local Catholic talk radio station I listen to for information purposes that did an abrupt about-face in regard to their new show, “The Catholic Current” (see far below). The show was highly critical of pope Francis and his progressive allies, but after only twenty-four broadcasts it was pulled, put on hiatus for a month, and brought back completely revamped with absolutely no explanation.

Conservative Catholic clergy and laity are struggling mightily with how to approach pope Francis’ recent lifting of the ban on communion for remarried divorcees in his “Amoris Laetitia” encyclical. This recent flip-flop by the Catholic radio station is just one example of the great distress caused by Francis’ dogma-defying pragmatism. I pray many Catholics will begin to question the fallible foundations of their church and turn to Jesus Christ by faith alone in light of this controversy.

Today, I sent the email below to the individual on the radio station’s staff who moderates “The Catholic Current,” asking for honesty and transparency.

“Whoever walks in integrity walks securely, but whoever takes crooked paths will be found out.” – Proverbs 10:9

Dear Mr. Havens, I was a regular listener for several years of the former “Calling All Catholics” talk radio show broadcast on WLOF. As you know, on January 3rd the name of the show was changed to “The Catholic Current” and a new format was introduced that primarily addressed the errors and confusion creeping into the church from progressives, including pope Francis. Previous priest hosts were jettisoned and traditionalist priests were brought aboard including David Nix, Ronan Murphy, and Shannon Collins. For twenty-four broadcasts, from January 3rd until February 6th, the traditionalist priests strongly criticized the church progressives, including the pope, in connection with a variety of topics. But suddenly it all stopped. Without any explanation, “The Catholic Current” was temporarily replaced by broadcasts of Al Kresta’s national Catholic talk show. WLOF’s website stated “The Catholic Current” was “on hiatus.”

The show began broadcasting again on March 12th, but notably missing were Nix, Murphy, Collins, and also, Robert McTeigue, and any open criticisms of the pope and other liberal members of the hierarchy. The current subject material is quite non-controversial in contrast. Not one word of explanation was given on the March 12th broadcast regarding the hiatus, the dramatic change in subject material, or the dismissal of the four priest hosts. Not only that, but all of the previous twenty-four shows were deleted from the podcast archive as if they had never happened.

In the introduction to each of the twenty-four broadcasts, you stated that open discussions of controversial topics affecting the church were necessary and healthy, but the station’s recent actions would seem to completely contradict that statement. Can you please address on the show what happened at WLOF regarding the dramatic changes to “The Catholic Current”? I’m sure many of the other listeners noted the recent, unexplained changes and came to the conclusion that it’s just one more example of the “business as usual” stifling of honest opinion within the Catholic Church. I believe you owe your listeners and supporters a transparent explanation of what happened rather than this silence and acting as if the twenty-four broadcasts had never happened.

via Catholic stuff on cable, network television, and radio