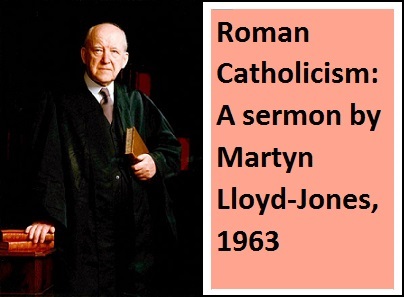 In our current “post-modern” era, when tolerance, plurality, and relativism are, in effect, worshiped as idols, it’s considered VERY bad form to criticize anyone’s religious beliefs. This attitude has also regrettably infected the Christian church. It’s ironic but there seems to be more tolerance for false teachers and false churches these days than for those who say a critical word about them.

But it wasn’t all that long ago that Christian pastors and leaders passionately warned their flocks about false gospels like the gospel of Roman Catholicism. What happened? Why have evangelical leaders gone silent or even embraced Rome?

About eighteen months ago, I posted a sermon about Roman Catholicism given by Welsh-English pastor, Martyn Lloyd-Jones (1899-1981). I later discovered that that version of Lloyd-Jones’ sermon had been abridged, but recently I was able to find a PDF of the complete 14-page sermon (see below). I printed out a copy for myself and had it spiral-bound at Staples because I’m sure I will refer to it periodically.

Praise the Lord for all the faithful pastors and watchmen who aren’t afraid to oppose the growing ecumenism with Rome and its false gospel of salvation by sacramental grace and merit.