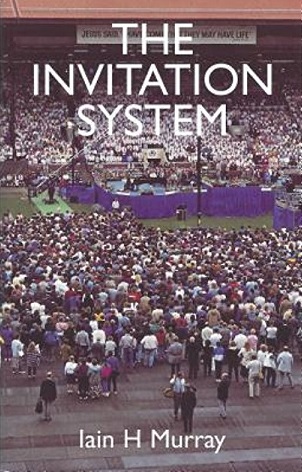 Our sister at Biblical Beginnings (see here) and I were recently discussing “decisionism” (sinner’s pray, altar calls, coming forward, etc., for salvation) and so I ordered this booklet, which I had already been planning on reading at some point.

The Invitation System
By Iain H. Murray
The Banner of Truth Trust, 2002, 38 pages

The independent fundamental Baptist church my wife and I attended for eight years after we accepted Christ as Savior had a familiar routine. The pastor closed all three weekly services – Sunday AM, Sunday PM, and Wednesday PM – in the same way: first with a prayer that related to the teachings of the sermon followed by an invitation to receive Christ, followed by the sinners prayer, and then an encouragement from the pastor, “with all heads bowed, and all eyes closed, and nobody looking around,” for anyone who had prayed the prayer and accepted Christ as personal Savior, to raise their hand. Perhaps the most famous (some would say infamous) example of the “invitation system” was at the crusades of Billy Graham* who asked “seekers” to physically leave their seats and walk to the front of the speaker’s platform where they would be led to pray the sinner’s prayer.

That all seemed to me like a reasonable way to lift up Christ and His salvation to lost people and encourage them to accept Christ. Personally, I had accepted Christ after years of reading the Bible and then talking with Christians at work and reading the tracts they strategically placed in the men’s restroom. I had read over the sinner’s prayer on the back of the tracts many times, but resisted praying it for several reasons. But the Lord continued to convict me of my sinful and helpless condition and my need of the Savior and I finally ran out of excuses and repented of my sins and asked the Lord to save me!

Fast forward to 2014. After my very dumb extended prodigal “season,” I returned to the Lord, but at the small SBC church we attended, an invitation was rarely given. Our current church that we’ve attended over the past two years also rarely extends an invitation to accept Christ during the service. What had happened? What did I miss? I’ve learned over the past four years that many churches and pastors don’t favor the “invitation system,” which has also been somewhat disparagingly labeled, “decisionism.”

In this short booklet, Iain Murray, former ministerial associate of D. Martyn Lloyd-Jones, critically examines the invitation system. He argues that many people have raised their hand or walked the aisle in response to an invitation without genuinely accepting Christ. They didn’t really understand the Gospel, but they responded due to some other internal or external pressure. Years later, they are, in essence, trusting in their physical response, e.g., they raised their hand in a Sunday School class when they were a child because everyone else was doing it, not in a genuine acceptance of Christ. Murray argues that pastors and workers should definitely lead people to a point where they realize their sinful state and their need of the Savior, but maintains that such methods as leading people in the sinner’s prayer or asking people to raise their hands or walk the aisle can lead to confusion and false conversions. The focus, he says, is on numbers rather than on genuine conversions that often take years (like mine).

Murray makes many good points, but I’m in the middle of this debate. It’s obvious that the invitation system can and has led to disingenuous conversions, but I believe there’s also a Biblical mandate to press people to make a decision for Christ.

For many people, having been invited to pray the sinner’s pray and then asked to acknowledge that they did so was eternally helpful.

Reading the sinner’s prayer over and over on the back of tracts was very helpful for me, although it took me a long time to finally trust in Christ. Are there also dangers if we don’t press people to decide for Christ and show them how that can be done through using the sinner’s prayer as an example and guide? Can vital opportunities be missed? Without leading people to pray the sinner’s prayers and pressing for positive affirmations of accepting Christ, do we encourage people to just drift along without understanding how to accept Christ and the desperate urgency of doing that? After getting my groundings in a church that used invitation system methods, our current church’s “non-decisionism” approach feels almost lackadaisical and indifferent.

I can see positives and negatives on both sides of this argument. There’s no doubt the Lord has blessed various approaches to giving out the Gospel. But I can certainly understand why someone who had a false conversion experience through the invitation system and then genuinely trusted in Christ afterward would have criticisms of it.

“The Invitation System” by Iain H. Murray can be ordered from Amazon here.

*Unbeknownst to most evangelicals, Roman Catholics who came forward at Billy Graham’s crusades were referred to Catholic workers who counseled them that their decision for Christ was simply a “reaffirmation” of their confirmation or infant baptism. Beginning in the early 1960s, Graham disappointingly solicited local Catholic bishops to participate in the planning and administration of his crusades.