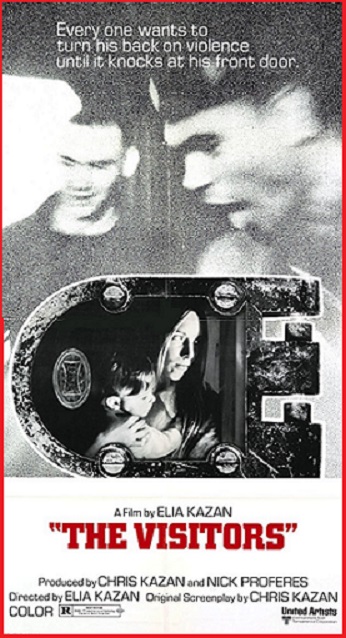 Elia Kazan had been one of America’s most celebrated and influential film and theatrical directors in the 1940s and 50s, but by the early 1970s, after the financial failure of five of his previous six movies, he could not find backing for a new film project written by his son, Chris Kazan, which explored themes regarding the unpopular Vietnam War. Kazan opted to film “The Visitors” himself on a shoestring budget using a 16mm camera.

Bill (Woods) and Martha (Joyce) and their infant child live in a Connecticut farmhouse owned by Martha’s domineering father, Western pulp fiction writer, Harry (McVey). They are not married and their relationship seems to be somewhat strained.

Two visitors, Sarge aka Mike (Railsback) and Tony (Martinez), show up at the house unexpectedly. They had served together in the same platoon with Bill in Vietnam, but Bill had testified against them at a court martial for wartime atrocities. The pair had been released due to a legal technicality after having been imprisoned for two years and had driven from Kansas to Connecticut to find Bill. The intentions of the visitors are unclear and Bill is nervous and fearful.

Harry stops by for a visit. He’s an overbearing redneck who enjoys the company of the two manly guests as much as he openly despises his daughter’s passive boyfriend.

As the night progresses, Martha learns from Bill the details of the wartime atrocity, which involved the rape and murder of a Vietnamese girl, and she angrily confronts Sarge. While she abhors him, she is also strangely attracted to his aggressive demeanor. Bill breaks things up and attacks Sarge. A fight ensues and Bill is beaten to a bloody pulp. Martha is also attacked. The visitors leave, satisfied that they have meted out justice. After Bill regains consciousness, he asks Martha if she’s all right. She just stares back at him with silent contempt.

The moral of the story: It was bad enough to see the violence of Vietnam on the television screen, but it was something altogether different when it crossed over your threshold.

Kazan stated in an interview that “The Visitors” was an “anti-war picture,” and that it was about “the price of the Vietnam War on the soul of the American people.”  While the production quality is unsurprisingly low given the budget constraints, the rising tension between the characters is palpable. Railsback’s character is especially convincing as a coiled cobra patiently waiting to strike its victim. The script was loosely based on a portion of Daniel Lang’s book, “Casualties of War” (1969), which also inspired Brian De Palma’s same-titled 1989 film.

Like the Bill character, Kazan had also testified against his friends at the House Un-American Activities Committee hearings in 1952 when he named the names of former associates of the American Communist Party. While I haven’t read of Kazan having ever been physically attacked because of his testimony, he was widely ostracized by liberals on both coasts until his death in 2003.

The shoestring-budget movie was filmed at Kazan’s home and property in Sandy Hook, Newtown, Connecticut (yes, THAT Sandy Hook where 20 elementary school children and 7 adults were massacred by a disturbed young man in 2012). It’s unique among all of Kazan’s films because of its extremely basic, no-frills production quality. “The Visitors” had an extremely limited release. Of all of Kazan’s nineteen films, “The Visitors” is the only one not on DVD, but it is available as a VHS tape and through Amazon streaming.

The United States’ protracted involvement in the Vietnam War wore down the resolve of the American people. By the time Kazan made “The Visitor” in 1972, the nation had had enough. In 1973, America ceased military operations in Vietnam. South Vietnam eventually fell to the North Vietnamese-led forces in 1975.

The First World War was proclaimed to be “the war that would end all wars.” International organizations such as the League of Nations and the United Nations were established to find peaceful solutions to international conflicts. But conflicts and wars continue. As the Bible says, the hearts of men are desperately wicked. Individuals have a difficult time maintaining harmonious relationships let alone nations. The only lasting peace comes through a relationship with the Lord, Jesus Christ. Accept Jesus Christ as your Savior.