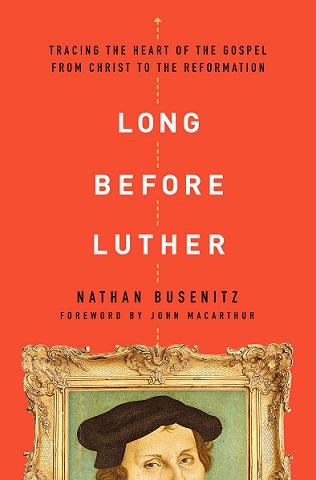 The 500th Anniversary of the Reformation is coming up in about two months on October 31st. Praise the Lord for all the men and women He raised up who returned the church to the Gospel of salvation by God’s grace through faith in Jesus Christ alone, despite the intimidation and violence of the Roman Catholic church.

There’s many good introductory books available on the Reformation with one of my favorites being Michael Reeves’ “The Unquenchable Flame: Discovering the Heart of the Reformation.” See my review here.

Catholics love to claim their church has been around for 2000 years and that Protestants didn’t get their start until 1517. At what point the early church of Christ fully devolved into the apostate, institutional Roman Catholic church is debatable because it was a gradual process over many centuries, but I believe there were always genuine followers of Christ, both inside and outside of Catholicism, way before the Reformation. Yesterday, I noticed a new book coming out shortly that discusses this very topic:

Long Before Luther: Tracing the Heart of the Gospel From Christ to the Reformation
By Nathan Busenitz with a forward by John MacArthur
Moody Publishers, October 3rd, 2017, 256 pages, $13.99

Where was the gospel before the Reformation?

Contemporary evangelicals often struggle to answer that question. As a result, many Roman Catholics are quick to allege that the Reformation understanding of the gospel simply did not exist before the 1500s. They assert that key Reformation doctrines, like sola fide, were nonexistent in the first fifteen centuries of church history. Rather, they were invented by Martin Luther, John Calvin, and others.

That is a serious charge, and one that evangelicals must be ready to answer. If an evangelical understanding of the gospel is only 500 years old, we are in major trouble. However, if it can be demonstrated that Reformers were not inventing something new, but instead were recovering something old, then key tenets of the Protestant faith are greatly affirmed. Hence, the need for this book.

After reading Long Before Luther, readers will:

NATHAN BUSENITZ, (M.Div., Th.M., Ph.D., The Master’s Seminary) is the Dean of Faculty and Assistant Professor of Theology at The Master’s Seminary. He holds a doctorate in church history, with a specific focus on patristic theology. He has served as a full-time member of the pastoral staff at Grace Community Church, director of the Shepherd’s Fellowship, managing editor of Pulpit magazine, and as the personal assistant to John MacArthur.

Speaking of Reformation 500, you don’t want to get to October 31st without a few Reformation 500 t-shirts ready in the clothes dresser. Sure, they’re a little tacky but that makes them GREAT conversation starters!

Order from Amazon here. Many logos (obviously some better than others) and colors to choose from.