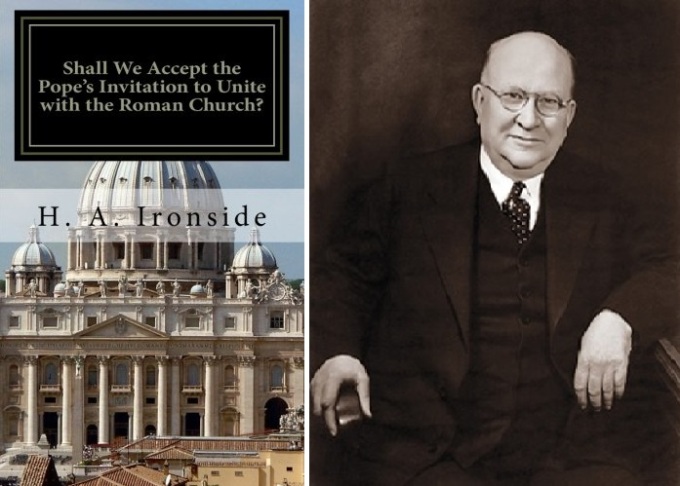 Shall We Accept the Pope’s Invitation to Unite with the Roman Church?
By H. A. Ironside
CrossReach Publications, 2016, 23 pages, $1.48

In this Kindle ebook pamphlet, H. A. Ironside (photo right, 1876-1951), former pastor of Moody Church in Chicago, remarks* upon pope Pius XI’s 1931 encyclical, “Lux Veritatis” (The Light of Truth), in which Pius “invited dissident branches of (c)hristianity to return to ‘the one fold’ under the pope.” Ironside cites both Scripture and church history to dispute Pius’ claims that the church has always “recognized the supreme authority of the bishop of Rome” and his alleged infallible teaching on matters of faith and morals. Pius goes on in the declaration to present Mary as the catalyst for (c)hristian unity, but Ironside references Scripture to thoroughly refute Catholicism’s Marian traditions.

Catholicism would greatly develop its ecumenical agenda with its “Unitatis redintegratio” (Restoration of unity) document in 1964 as part of the Second Vatican Council.

This short pamphlet would be a good introduction to the Catholic notions of (c)hristian “unity” and Mariolatry, with the qualifier that a lot of water has gone over the dam since 1931. A 2015 survey showed 58% of evangelical pastors consider the pope to be their “brother in Christ.” These days many evangelical leaders visit the Vatican and jostle in line for a photo op with the pope. Ironside would be sadly amazed. ☹

This is the second ebook pamphlet by H. A Ironside that I’ve read from CrossReach Publications. See my previous review of “Letters to a Catholic Priest” here.

*This pamphlet is actually a transcription of a sermon given by Ironside in 1932.

5 thoughts on “Unite with Rome?!?! [Sigh] If only H.A. Ironside could have seen what has happened. ☹”