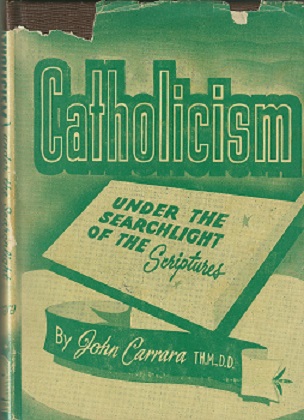 Catholicism Under the Searchlight of the Scriptures
By John Carrara
Zondervan, 1951 (Sixth Edition), 123 pages

Evangelist, John Carrara (1913-2008), was raised as a Roman Catholic but accepted Jesus Christ as his Savior as a teen and was called shortly thereafter to preach the Gospel of salvation by God’s grace through faith in Jesus Christ alone. Brother Carrara traveled to every state of the U.S.A. as an itinerant evangelist and featured speaker at Baptist church revivals, reaching out to the lost for 77 years and warning of the errors of Roman Catholicism, with its false gospel of sacramental grace and merit.

Very few will recall the name of John Carrara these days but he was a faithful servant of the Lord and of His Good News!

I had already read Carrara’s biography and a booklet he had written regarding evangelical-Catholic intermarriage (see here and here), so I also ordered this slightly dog-eared, 1951 edition of his “Catholicism Under the Searchlight of the Scriptures.”

This short book is a decent examination of the main tenets of Roman Catholicism compared to Scripture, although I had the distinct impression that at least the first chapter was transcribed from a sermon because of several redundancies. But every Catholic and evangelical would benefit from reading this book.

Evangelical pastors back in 1951 generally had little difficulty distinguishing between the genuine Gospel of grace and Rome’s false gospel of sacramental grace and merit. While none of Rome’s main dogmas have changed since that time, many of today’s pastors and para-church leaders now embrace the Catholic church as a Christian entity due to the work of compromising evangelical Judases (Billy Graham, Chuck Colson, Jerry Falwell, Bill Bright, etc.) over the years. These days, Zondervan-Thomas Nelson is as apt to publish a book by a committed Catholic as it is a book written by an evangelical.

For a much more thorough and up-to-date examination of Catholicism, see “The Gospel According to Rome” by James G. McCarthy, which is readily available from Amazon. See here.