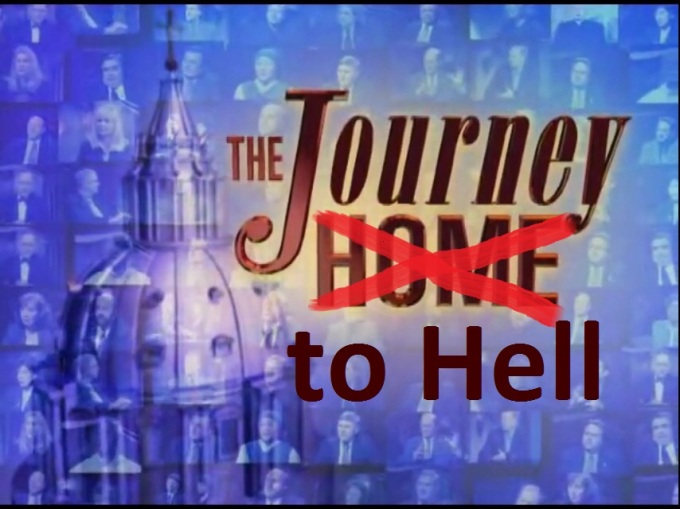 One of the most popular programs on the EWTN cable television channel is “The Journey Home,” hosted by Marcus Grodi. During the hour-long presentation, Grodi interviews reverts and converts to Roman Catholicism. The guests express their profound appreciation for “coming home” to the “one true church,” with its alleged “apostolic authority” and spiritually “essential” sacraments.

Catholicism teaches a person must receive its sacraments and obey the Ten Commandments perfectly in order to merit their salvation. That is not something to be happy about, but is actually an impossible burden shared by all who believe they must earn their salvation. How much is enough? How good is good enough? It’s a religious treadmill that never ends in this lifetime and ultimately leads to eternal damnation. I was a Roman Catholic for twenty-seven years until I accepted Jesus Christ as my Savior by faith alone. Praise the Lord that my salvation is secured in His perfect, imputed righteousness and not my own miserable efforts. I have no righteousness other than my Savior’s righteousness.

Conservative Roman Catholics tune into “The Journey Home” and find great encouragement and satisfaction in the stories of those who have returned or converted to Catholicism. I, however, feel tremendous sadness for all those who have voluntarily submitted to the spiritual chains of Rome. I will readily admit that the rituals, ceremonies, great pomp and circumstance, and worldly trappings of Catholicism hold great appeal to many, but beneath the whited sepulchre is a grave full of dead men’s bones. Former “evangelicals” who appear on the show never genuinely trusted in Christ or they wouldn’t be celebrating their spiritual shackles.

“The Journey Home” purposely leaves its audience with the false impression that many Americans are converting to Catholicism. In actuality, for every person baptized, the U.S. Catholic church loses six members. See here. All a Catholic needs to do is look around at the empty pews in church on Sunday morning to comprehend what’s really going on. I praise the Lord for the large number of those souls who left Catholicism and accepted Christ and now follow the Lord as members of evangelical Christian fellowships. Thank you, Lord, for opening the eyes of so many and freeing them from the chains of Catholicism! Thank you, Jesus!

Genuine evangelical believers can’t boast of any communications conglomerates* as part of a colossal religious institution, but there are many testimonies available from ex-Catholics who left the legalism and ritualism of Rome and and accepted the free gift of salvation by God’s grace through faith in Jesus Christ alone. For just a few examples, see here, here, and here.

It’s quite interesting to me that Catholics eagerly crow about “evangelicals” who have converted to Roman Catholicism on such outlets as “The Journey Home,” yet many/most evangelicals are absolutely mortified when a fellow believer “uncharitably” asserts that Rome teaches a false gospel.

“But now the righteousness of God has been manifested apart from the law, although the Law and the Prophets bear witness to it – the righteousness of God through faith in Jesus Christ for all who believe. For there is no distinction: for all have sinned and fall short of the glory of God, and are justified by his grace as a gift, through the redemption that is in Christ Jesus.” – Romans 3:21-24

* Some might point to the Trinity Broadcasting Network (TBN) as an evangelical media enterprise but that outfit is operated by the purveyors of the false “health and wealth”/”name it and claim it” prosperity gospel and regularly features Catholic guests and spokespersons.

16 thoughts on “The Journey “Home” or the journey into spiritual bondage?”