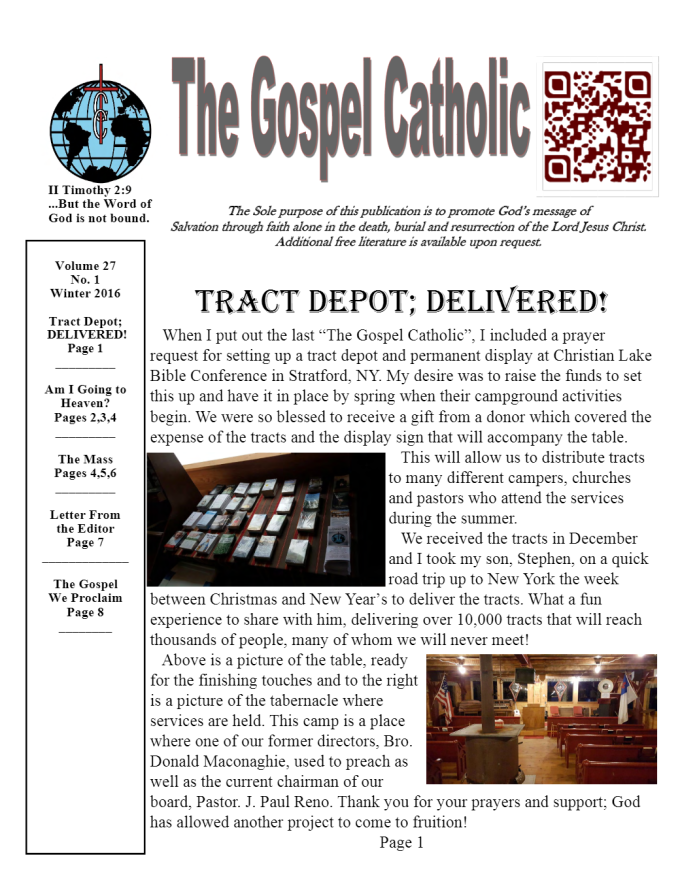 After my wife and I accepted Jesus Christ as our Savior in 1983, we began attending an independent fundamental Baptist church in the area. The church’s information table was stocked with tracts and the latest issues of “Our Daily Bread” and “The Sword of the Lord,” a newspaper geared toward independent fundamental Baptists. Inside “The Sword of the Lord” were advertisements from Christian outreaches to Roman Catholics including The Conversion Center (Donald Maconaghie), Mission to Catholics (Bart Brewer), and Christians Evangelizing Catholics (Bill Jackson). Coming from a Catholic background, I was thrilled to see there were ministries devoted to reaching Catholics for Christ. I immediately wrote to all three ministries requesting their catalogs of available books and pamphlets and to be added to their mailing lists. This was obviously before the internet era. All the materials I received were a blessing to me at the time.

I eventually soured on what I was hearing from the pulpit of our IFB church, which sadly resulted in my walking away from the Lord for many years. In the interim, Bart Brewer of Mission to Catholics went home to be with the Lord in 2005 at the age of 80 although his website is strangely still available with a note saying it was last updated in 2006 (see here). I’m not sure of the status of Bill Jackson although a note posted in 2007 on the Apprising Ministries website states Bill suffered a second heart attack. There’s no trace of Jackson on the internet after that and the website for Christians Evangelizing Catholics is no longer operational. The Conversion Center continued to faithfully send me quarterly newsletters during my very long prodigal “season,” much to my discomfort (praise God!), and the ministry continues to this day.

The Conversion Center was founded in 1952 by Alex O. Dunlap, and was led many years by Donald F. Maconaghie (d. 2001). The current director is Mark Reno. The Conversion Center reflects hardcore independent fundamental Baptist beliefs and previously offered books from Chick Publications via its on-line store. The organization also upholds KJV 1611-Onlyism like many other IFB churches and groups. The Conversion Center has recently updated its website (see here), which includes on-line copies of its quarterly newsletter (see photo). Gone is the long list of book and pamphlet offerings but there is a very large assortment of tracts written for Catholics. I don’t agree with The Conversion Center’s endorsement of Chick publications and its view on KJV 1611-Onlyism, but I certainly do support their outreach to Roman Catholics with the Gospel of grace.

In addition to The Conversion Center, there are several other ministries that reach out to Roman Catholics with the Good News! of salvation by God’s grace through faith in Jesus Christ alone. See my Links page here.

4 thoughts on “The Conversion Center: Still Reaching Out to Catholics after 65 years”