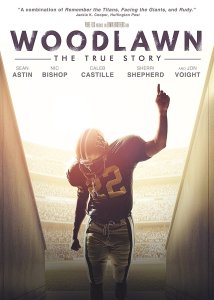 Every morning on my drive into work, I catch the tail-end of evangelist Greg Laurie’s radio show. I’m not a big fan because of Laurie’s ecumenical leanings but many months ago I heard him discussing “Woodlawn” with one of the movie’s directors and I picked up the DVD out of curiosity. This week I finally got around to watching it.

In 1973 in his sophomore year, African-American student, Tony Nathan (Caleb Castille), is bused to Woodlawn, a previously segregated all-white high school in Birmingham, Alabama. Nathan is an extremely talented athlete but Coach Tandy Gerelds (Nic Bishop) keeps him on the bench because he doesn’t want to rile the good ol’ boys of the community who are already on edge. Racial tensions on the team compound an already dismal start to the football season. A Christian evangelist, Hank Erwin (Sean Astin), asks if he can give a motivational talk to the team and most of the players profess accepting Jesus Christ as their Savior. Racial tensions ease as the players are increasingly united in their faith. Nathan is given the starting job as the team’s featured running back, but as the wins begin piling up he must reconcile his growing popularity with a budding romantic relationship and with his faith in Christ.

The Gospel begins to spread through the high school campus and Bible studies and prayer groups become the norm. Even reluctant Coach Gerelds accepts Christ. Impacted by what’s happening at Woodlawn, the revival spreads to other high school campuses. A large number of the players from the Banks high school football team, once a bitter rival of Woodlawn, also accept Christ. Forty-thousand fans turn out to watch Woodlawn play Banks but it’s more about cheering for Jesus and racial harmony than for a ball game.

The writing, acting, and production standards of this film all leave a lot to be desired.

It was somewhat inspirational to see this portrayal of faith spreading so quickly among so many, but how many of the young people of Birmingham actually accepted Christ in 1973 and how many were just caught up in religious emotionalism and hysteria? “Woodlawn” left me with an uneasy feeling. This film gives a great deal of credit for the Woodlawn “revival” to the after-effects of “Explo 72,” a Campus Crusade for Christ conference that drew more than 80,000 college and high school students to the Cotton Bowl stadium in Dallas, Texas over the course of five days in 1972, featuring Billy Graham and Bill Bright as the main speakers. An affiliated, one-day music concert, later dubbed as the “Christian Woodstock,” drew over 100,000.

Graham is hailed as the greatest evangelist of our times yet no one has done more to blur the Gospel of grace and further evangelical ecumenism with Rome. At the end of the film, viewers are encouraged to attend Laurie’s Harvest 2016 happening in Dallas as well as the ecumenical “Together 2016” event in Washington, D.C., which included a video message from pope Francis. When the credits rolled at the end of “Woodlawn,” I was not surprised to see the executive producers were Roman Catholic/New Age ecumenist, Roma Downey, and her husband, Mark Burnett.