Catholic talk radio is abuzz with chatter about Fatima. This year, Catholics round the world will be celebrating the 100th anniversary of the alleged apparition of Mary to three peasant children at Fatima, Portugal in 1917. Pope Francis is scheduled to visit Fatima on May 12th and 13th when he will declare the three children, Lúcia Santos and Francisco and Jacinta Marto, as “saints.” 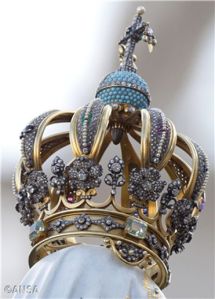 was devoted to “Our Lady of Fatima” and was convinced she had saved him from an assassination attempt in 1981. One of the bullets that was removed from John Paul’s body was mounted in the crown placed on the statue of Mary at the sanctuary at Fatima (see photo of crown with bullet protruding under blue globe).

With Fatima we have another example of Mariolatrous pageantry and ceremony, with absolutely no attention given to accepting Jesus Christ as personal Savior by faith. Splendid religious ritual and solemnity devoted to Mary have pushed aside simple, saving faith in Christ.

Catholics proclaim that Mary is the Queen of Heaven and that she rules as Mediatrix of All Graces and as Co-Redeemer. But God does not share His glory with another.

“The children gather wood, the fathers kindle fire, and the women knead dough, to make cakes for the queen of heaven. And they pour out drink offerings to other gods, to provoke me to anger.” – Jeremiah 7:18

Fatimah was the favorite daughter of false prophet, Muhammad. As a consequence, many Muslim girls are given her name. Fatima, Portugal was named after a Moorish princess. Christians would be surprised to learn that Muslims venerate Mary. She is mentioned much more in the Quran than the Bible. Many Muslims make the pilgrimage to Fatima. Could another Marian apparition at Fatima someday be the catalyst for a one-world religion?

See a live webcam of the Marian statue with the bullet crown at the Fatima sanctuary here.

18 thoughts on “A bullet in the crown of the “Queen of Heaven.””