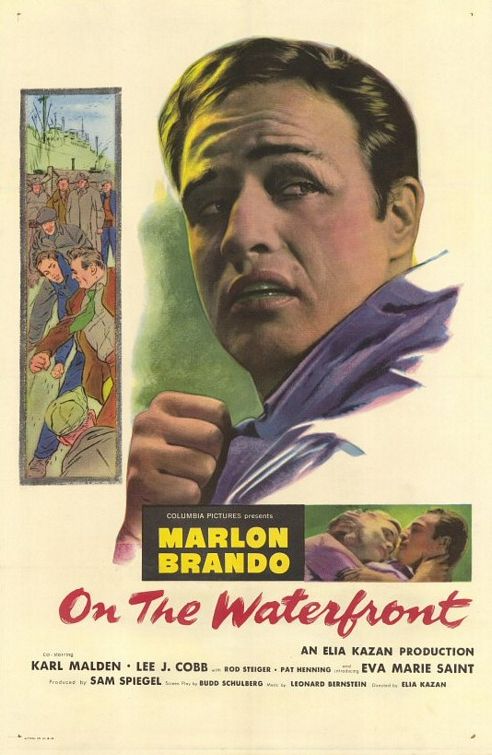 By 1954, Elia Kazan was recognized as one of America’s most important and influential film and theater directors. But he was also widely despised for naming the names of former fellow communists before the House Un-American Activities Committee (HUAC) in 1952. Kazan threw his energy into his craft and created what would be the masterpiece of his career; “On the Waterfront.” Students of Kazan see in the director’s previous nine films his gradual ascent to “Waterfront” and in the nine films that follow, we can see his gradual decline.

A longshoreman and ex-boxer, Terry Malloy (Marlon Brando), is indirectly involved in the murder of a fellow longshoreman who was scheduled to testify at crime commission hearings on the corrupt dockworkers’ union. Terry’s brother, Charlie (Rod Steiger), is the right-hand man of the ruthless union boss, Johnny Friendly (Lee J. Cobb). Terry becomes increasingly conflicted about his involvement in the murder, especially after he begins a relationship with Edie (Eva Marie Saint), the victim’s sister. When Terry is subpoenaed to testify against the union, he wavers. A Catholic priest, father Barry (Karl Malden), encourages Terry to do the right thing. Friendly murders Charlie because he can’t keep his brother in line. Terry finally testifies against Friendly but is viewed disdainfully as a stool pigeon by his fellow longshoreman. Terry goes down to the docks to work but is shunned by both the union men and the longshoremen. He confronts Friendly and a fight ensues. Terry is beaten to a pulp by Friendly’s goons but staggers to his feet with the help of Barry and triumphantly leads his fellow longshoremen back to work.

Budd Schulberg based his screenplay on investigations into union corruption on the docks of New York City and New Jersey. Schulberg and Kazan were unable to interest Darryl F. Zanuck at Fox or the other studio heads in a movie about longshoremen so they turned to independent producer, Sam Spiegel. “Waterfront” was filmed in only five weeks and almost completely on-location in Hoboken, New Jersey on a shoestring budget. The film was enthusiastically embraced by the public. It was nominated for twelve Oscars and earned eight: Best Picture, Director, Actor (Brando), Supporting Actress (Saint in her film debut), Screenplay, Cinematography (Boris Kaufman), Art Direction, and Editing. Cobb, Malden, and Steiger had all been nominated for their performances as well. Leonard Bernstein’s powerfully moving nominated score should have won also. Waterfront has twice been voted by the American Film Institute as one of the 20 best American films ever made; #8 in 1998 and #19 in 2007.

Waterfront was a revelation to movie audiences in 1954. Most had never seen that level of realism in a film before. Brando’s performance in “Waterfront,” became the standard of American acting for decades. The rest of the method-trained main cast did an outstanding job and the film is remarkable for its use of many non-actors. Shulberg was able to get several of his ex-boxer friends bit parts in the film as mob muscle: Tony Galento, Tami Mauriello, Abe Simon, and Lee Oma. Brando’s and Steiger’s taxi cab scene is widely considered one of the most memorable moments of American cinema. Brando’s “I coulda’ been a contenda” was voted the third best movie quote ever by AFI in 2005.

Many viewed Terry’s testimony against the union in “Waterfront” as Schulberg’s and Kazan’s defense of their HUAC testimonies. There’s certainly parallels but to what extent fiction mirrored fact will continue to be debated.

“On the Waterfront” was released as a Criterion Collection Blu-ray in 2013 with the following bonus features:

Trivia fact: Towards the end of the film, Terry stares past Edie to a large passenger ship moving down the Hudson River. The ship was the Andrea Doria, which would make international headlines when it sank in 1956 off the coast of Nantucket, Massachusetts.

Additional thoughts from a believer’s perspective

I love this movie. Can you tell? I can’t help but break up a little bit each time I watch it. Kazan mentioned in an interview that even audiences in the Midwest could relate to Terry the New Jersey longshoreman because everyone is searching for love and “redemption.” Yes, everyone has a spiritual emptiness that they try to fill with relationships, careers, entertainment, hobbies, education, empty religion, fitness workouts, food, drugs and alcohol, etc. But the only One who can truly fill that spiritual void and actually redeem us from the chains of sin and unworthiness is Jesus Christ, the Lord!

Thank you, Jesus, for reaching down for me!