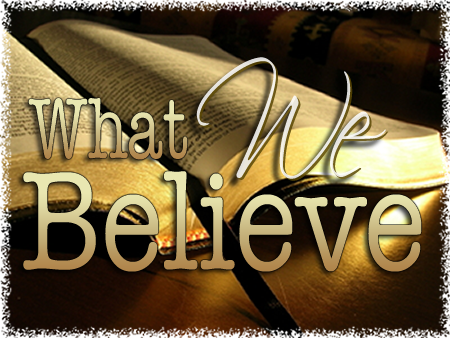 I’m currently reading “God’s Word Alone: The Authority of Scripture” by Matthew Barrett. It’s book #3 in Zondervan’s series on the five “solas” of the Reformation. Dry theology? Hardly! As Christians, we stand on God’s Word ALONE rather than on the teachings and traditions of men. The book is well-written and the pages are turning pretty quickly (review to follow in a couple of weeks). This book – such a treasure – prompted me to post on creeds, confessions, and lists of core beliefs in general.

My wife and I attended an independent fundamental Baptist church for eight years after we accepted Christ. After a very long prodigal “season” we attended a Southern Baptist church for a year. For the last sixteen months we’ve been worshipping at a nondenominational evangelical church. The church began as a Baptist church and has a long history. Several years ago the church decided to shed the “Baptist” label to appeal to more people although Baptist teaching and polity are still followed.

I’m somewhat knowledgeable about the history of the Baptist movement and I’m personally most comfortable within that faith tradition. Evangelical churches generally have a list of basic beliefs they follow with the Gospel of salvation by God’s grace through faith in Jesus Christ at the core. There’s some evangelical churches that I couldn’t comfortably worship at because of their beliefs regarding secondary doctrines but we’re still all united in our faith in Christ.

Christians have been formulating creeds, confessions, and statements of core beliefs for centuries in an attempt to summarize the faith. Some statements have been more helpful than others. The early creeds were woefully deficient because they didn’t spell out exactly HOW a person appropriates the free gift of salvation by God’s grace through faith in Jesus Christ alone. Billions have recited the Apostles’ and Nicene Creeds over the centuries without ever accepting Christ as Savior by faith.

The Reformers of the 16th and 17th centuries strove to return the church to the simple, saving faith proclaimed by the New Testament church. The movement was centered around what came to be known as the Five Solas of the Christian faith:

As evangelical Christians, we base our beliefs on God’s Word rather than man-made creeds but if you have to summarize the faith, the Five Solas ain’t a bad way to go.

Our previous pastor mentioned the Five Solas regularly in his messages but I haven’t heard our new pastor mention them once in the past seven months. I suspect that congregations throughout evangelicalism are hearing less and less about the Five Solas of the Reformation, all part of the dumbing down of doctrine that’s part and parcel of the popular seeker mega-church movement.

23 thoughts on “Creeds, confessions, and lists of beliefs”