Answers to my Catholic Friends 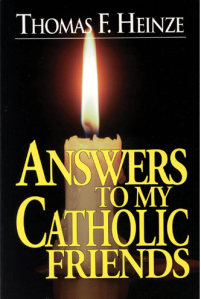 This little booklet gives a nice summary of some of the main differences between Roman Catholicism and Bible Christianity. It’s well-written and scripturally sound and would otherwise make a great gift to Roman Catholics. Unfortunately, it’s published by Chick Publications. Chick published a large number of books and “comic” books which made many irresponsible and fictitious claims regarding the Vatican’s alleged culpability for just about every deplorable institution and calamity known to man including Islam, Masonry, the Ku Klux Klan, Communism, Nazism, the Great Depression, both World Wars, the Holocaust, Mormonism, and the Jehovah’s Witnesses. Chick’s outrageous claims of Vatican and Jesuit conspiracies undermined the efforts of credible Christian ministries that reached out to Catholics. There’s no doubt in my mind that the evil one was working through Chick Publications.

I was given this booklet as a gift. I would not recommend that a Christian distribute this or any other Chick materials to unbelievers. Even if the information in a specific item is OK, as in the case of this booklet, as soon as the recipient checks Chick’s online catalog, your credibility goes down the toilet.

4 thoughts on “Good but not recommended?”