This past Wednesday, Pew Research released the findings of its recent poll regarding the 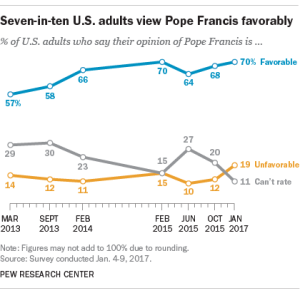 It’s a sad thing that 53% of (White) professing believers favorably view a man who is leading millions to hell through the anti-Scriptural dogmas of Roman Catholicism. 16% of White evangelicals say they have no opinion of the pope and 31% say they have an unfavorable opinion.

I love pope Francis, Jorge Bergoglio. He’s a sinner in need of the Savior. Unfortunately, he leads a 1.2 billion-member religious institution that teaches people are saved through its sacraments and through obeying the Ten Commandments (impossible!) and church rules.

If Pew Research pollsters could get into a time machine and go back 100 years and conduct the same poll, what would they find? They would probably find that close to 100% of evangelical Christians in 1917 had an unfavorable opinion of the pope at that time, Benedict XV. Would they have rated the pope unfavorably because they had personal animosity toward the man? It’s my opinion that believers of 100 years ago were much more steeped in God’s Word than many of today’s doctrine-lite evangelicals who are led by weak, accommodating, and compromising pastors. Evangelicals of 1917 were much more aware that the pope taught a false gospel of sacraments and merit rather than the Gospel of salvation by God’s grace through faith in Jesus Christ alone.

I will continue to pray for Jorge Bergoglio and for all Roman Catholics. My prayer is that they will renounce their religious ritualism and legalism and accept Jesus Christ as their Savior through faith alone.

“No one can merit the initial grace which is at the origin of conversion (i.e. baptism). Moved by the Holy Spirit, we can then merit for ourselves and for others all the graces needed to attain eternal life, as well as necessary temporal goods.” – Catechism of the Catholic Church, paragraph # 2027

“For by grace you have been saved through faith. And this is not your own doing; it is the gift of God, not a result of works, so that no one may boast. For we are his workmanship, created in Christ Jesus for good works, which God prepared beforehand, that we should walk in them.” – Ephesians 2:8-10

It can’t be both!

7 thoughts on “The popularity of pope Francis”