Why a Preacher and Not a Priest: A Biography of Evangelist John Carrara

Way, way back in the day, pastors of evangelical and fundamentalist churches used to regularly invite itinerant evangelists to their churches for several days of “revival.” These fellas preached the Gospel with passion, often resulting in many souls accepting Jesus Christ as Savior or Christians rededicating their lives to the Lord. One such evangelist was John Carrara (1913-2008) of Fairview, New Jersey. Carrara was born into a Roman Catholic family and as a young teen even thought about becoming a priest. When he was fifteen, Carrara attended a Protestant service unbeknownst to his parents and was stirred by the sermon and the Bible verse displayed on the church wall: “For God so loved the world, that he gave his only Son, that whoever believes in him should not perish but have eternal life” (John 3:16). John was convicted by God’s Word and eventually accepted Christ at a following service. He faced significant persecution from his family and friends for rejecting the Roman Catholic gospel of sacramental grace and merit and accepting Jesus Christ. During a savage beating, his father struck him so hard with a broomstick that one of his shoulders became separated. The Lord soon called him to be an evangelist and John immersed himself in the Word in preparation. Despite the many obstacles, young John began preaching before people at the age of sixteen and over the course of his ministry he preached the Gospel in churches and assemblies in 40 states and Canada.

I enjoyed this biography of Carrara tremendously once I got used to the simplistic prose of its time. The book was very popular resulting in Zondervan publishing twelve editions between 1937 and 1967. The author only lightly touches upon the many secondary differences between Roman Catholicism and Bible Christianity but great emphasis is given to the most important difference – justification. Is a person saved by grace received through the Catholic sacraments (baptism, confirmation, the eucharist, confirmation, and last rites) and obeying the Ten Commandments and church rules as Rome teaches or is a person saved by God’s grace through faith in Jesus Christ alone? I imagine many born again believers presented this popular book to Roman Catholic friends and family members.

Rarely will you encounter a book like “Why a Preacher and Not a Priest” on the shelves of Christian book stores these days. John Carrara was born in 1913, back when most evangelicals knew the difference between the Gospel of grace through faith and Rome’s false gospel of sacramental grace and merit. Another traveling evangelist, Billy Graham, was born just five years after Carrara in 1918. While many accepted Christ because of Graham’s ministry, no one did more to compromise and muddy the distinctives of the Gospel of grace through faith than Billy Graham. Graham counseled Catholic men and women who, like Carrara, were drawn by the Gospel, to stay in the Catholic church; that its works-gospel was “close enough.” Many evangelical pastors and para-church leaders have followed Graham’s betrayal. The world has largely forgotten about John Cararra and the other evangelists of a generation or two ago who preached the pure Gospel of grace but it venerates and idolizes Billy Graham and that is no surprise.

“Woe to you, when all people speak well of you, for so their fathers did to the false prophets.” – Luke 6:26

Used copies of “Why a Preacher and Not a Priest” are readily available through Amazon.com. 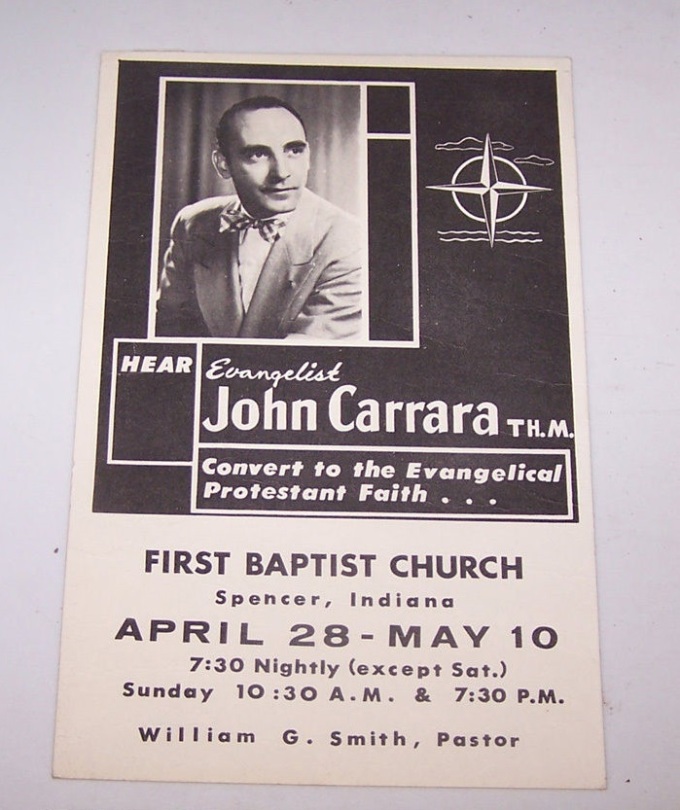 The First Baptist Church of Spencer, Indiana mentioned in the undated poster above is still in existence but, as part of the apostate American Baptist Churches USA, no longer preaches the Gospel.

3 thoughts on “Back before they muddied the Gospel”