Should Protestants and Roman Catholics Intermarry? 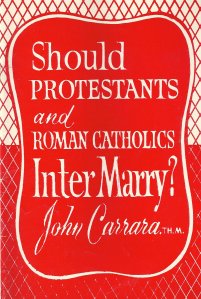 Brad was fourteen-years-old when he accepted Jesus Christ as his Savior at a youth event sponsored by his parents’ evangelical church. He loved reading God’s Word and following the Lord but soon he was off to college and a busy schedule of studies and sports. Brad met Sara in one of their senior classes and was smitten with the attractive and outgoing young woman. Their relationship grew and after graduation the couple became engaged. Sara was a Roman Catholic but that didn’t seem to be a big problem. She talked fondly about her church and Jesus. Brad’s parents were a little concerned that Sara was Catholic but Brad assured them that she also loved Jesus and pointed out that Billy Graham and some other popular evangelicals embraced Catholics as fellow Christians.

When it came time to make their wedding plans, Sara said she was required to get married at her church. Brad was fine with that. They sat down with the priest and discussed the arrangements. The priest asked Brad to sign an agreement promising that he would not interfere with Sara’s religious beliefs and that any children they had together would be raised in the Catholic faith. Brad was weirded out by all that but perceived the document as just one more hurdle to jump over on his way to wedded bliss.

The couple was finally married and settled into their new home. Brad didn’t have much time for the Lord in college or during the wedding process but began to follow Him closely again. He found an evangelical church in their area and Sara attended a few times with him but said she was more comfortable going to mass. Brad attended mass several times with her and noticed a lot of ritual and ceremony but he never heard the Gospel. The more Brad talked with Sara about God, the more he learned how different her beliefs were in comparison to his. Sara believed God granted salvation to those who participated in the Catholic church’s sacraments and obeyed the Ten Commandments and church rules. Brad was shocked! He was no theologian but he knew from God’s Word that no one could possibly merit their salvation by obeying the commandments. Brad believed the Good News! of salvation by God’s grace through faith in Jesus Christ alone. He ordered a few books about Catholicism from evangelical authors to learn more and was amazed at the many differences between evangelical Christianity and Roman Catholicism.

Brad began praying that Sara would accept Christ as Savior while she prayed that he would convert to Catholicism. One day Sara came to Brad with news that she was pregnant. Brad was overjoyed but in the back of his mind he was thinking he did not want this child or any other children they might have to be raised as Catholic. Brad regretted jumping into an unequal marriage without seriously considering the spiritual ramifications.

In this 1963 booklet published by Zondervan (Yes, Zondervan! My, how things have changed.), evangelist John Carrara breaks it all down and includes a copy of the 4-page document Protestants must still sign* for a priest before marrying a Catholic. In our current era of ecumenical accommodation and compromise, a booklet such as this would be viewed by most as sectarianism at its worst but the Biblical truths of 1963 are no less valid today than they were back then. While the Catholic church doesn’t encourage interfaith marriages, it doesn’t prohibit them either, as long as strict guidelines are followed. That might seem a lot more magnanimous than Carrara’s warnings but don’t forget that the Catholic church also teaches everyone, even atheists, can also merit Heaven if they “sincerely follow the light they’ve been given” and are “good.” That’s not Christianity.

“Do not be unequally yoked with unbelievers. For what partnership has righteousness with lawlessness? Or what fellowship has light with darkness? What accord has Christ with Belial? Or what portion does a believer share with an unbeliever? What agreement has the temple of God with idols?” – 2 Corinthians 6:14-16

*For an update on the document in which the Protestant marriage partner promised to raise any children as Catholics, see here.

2 thoughts on “Should evangelical Christians yoke together with Roman Catholics?”