No sooner do I empty my inbox each weekend, that it fills right up again! Here’s the news 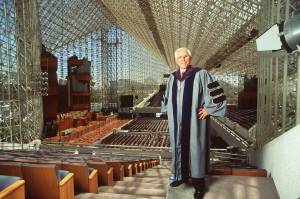 from the last seven days:

Remember smiling ecumenical minister, Robert $chuller (pictured)? He was the Joel Osteen of the previous generation. No messages about sin or hell, just lots of smiles. He died last year and his ostentatious glass church complex was bought by the local Catholic diocese and is currently being renovated to the tune of $72 million. $chuller’s ultra doctrine-lite grandson, Bobby Schuller, unsurprisingly has a regular slot on TBN.

Enlightening! Ca$h for canonization! No surprise. These kinds of backroom deals have been part and parcel for the Catholic church for centuries, folks.

Catholic traditionalists and progressives continue their no-holds-barred fight to control the future of the church. This is not how you spell u-n-i-t-y.

The American Catholic church is in deep, deep crisis mode as younger people are dropping away like the plague. They wonder why they should climb Catholicism’s mountain of religious legalism and liturgical rigmarole when the pope says even atheists will go to Heaven if they “follow the light they are given” and are “good.”

A week doesn’t go by that I don’t see a story about Rome pushing its ecumenical agenda.

This is an interesting article on the Catholic church’s premier Marian apparition, with the church marking Fatima’s 100th anniversary next year with great fanfare.

I applaud this school official in Italy who banned Catholic mass from public schools. I think I need to post a message down the road about American evangelicals who continue to bemoan the discontinuation of prayer in public schools.