My Life in the Convent 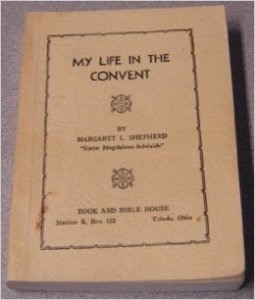 Protestant books examining alleged abuse in Roman Catholic convents proliferated in the 19th and early 20th centuries. Many of these books were written by ex-nuns. Catholic spokespersons naturally categorized these books as “Puritan pornography” and accused the authors of fraud.

An example of the genre is “My Life in the Convent” written by Margaret Lisle Shepherd (aka Sister Magdalene Adelaide), first published in 1892. As an English girl living in India, Shepherd learns from her dying mother that her deceased father was a Catholic priest. The apple doesn’t fall far from the tree so years later, after she has returned to England, Shepherd herself succumbs to the advances of a determined priest. Father Egan abandons his vocation and the two enter into a common-law marriage, which produces a baby girl. Egan eventually regrets his decision and abandons his family to resume his religious calling. With no means of support, Shepherd turns to thievery. She is apprehended but it’s too late for the baby who dies from the effects of malnutrition. After a few detours, Shepherd ends up at the penitential Convent of St. Arno’s Court in Bristol, England. It’s already a difficult existence for the contrite nuns but Shepherd describes how priests ministering at the convent occasionally take advantage of their charges. After two years at the convent, Shepherd discovers a Protestant Bible and is shocked to discover the many differences between Scripture and Catholicism and decides to leave. She is given sanctuary by Salvation Army ministers and accepts Jesus Christ as her Savior. She journeys to Canada and the United States, giving her testimony on the Protestant lecture circuit and assisting Christian charitable organizations.

The book’s epilogue circumspectly alludes to the Loyal Women of American Liberty, which Shepherd founded in Boston in 1888. The LWAL was a semi-secret patriotic society which promoted nativism and Protestantism. An internet search of Shepherd and the LWAL revealed Chicago newspaper reports of the period alleging Shepherd’s “deceit and immorality” regarding her account of her previous years, leading to her resignation from the organization in 1891. She wrote this book as an answer to her growing number of Catholic critics. Shepherd continued on the lecture circuit but faced mounting opposition from Catholic groups. She was arrested in Columbus, Ohio in 1902 on charges of selling “lewd and obscene” books, disorderly conduct, and inciting to riot. All charges were dropped when she agreed to leave the city. Shepherd subsequently traveled to Australia where she continued her lectures on Romanism but soon found herself sick with cancer. Returning to the U.S., she died alone and penniless in a Detroit hospital in 1903 at the age of 43. I only hope she had genuinely accepted Christ as her Savior.

Reprints of “My Life in the Convent” were made available for many years. My 1946 edition was published by Book and Bible House owned by L. J. King, a passionate Protestant nativist. This book may have been slightly scandalous, “adults only,” reading in 1892 but it’s certainly quite tame by 2016 standards.

With the number of Catholic nuns rapidly declining since the 1960s, convents are becoming increasingly few and far between. But were some nuns scandalously abused and mistreated over the centuries as this book and many others claimed? There’s no doubt. The church’s mandatory celibacy discipline for its priests and nuns couldn’t erase their sexuality. Refer to the excellent “The Nuns of Sant’Ambrogio: The True Story of a Convent in Scandal” by prize-winning, German historian, Hubert Wolf. Wolf used documentation from the vaults of the Vatican’s very own Office of the Holy Inquisition (the name was changed to the much more PR-friendly “Supreme Sacred Congregation of the Holy Office”) for his research. See here for my review. For other verifiable examples of clerical turpitude one need only recall the headlines over the last thirty years dealing with predatory pedophile priests and the subsequent cover-up by the church hierarchy.

At my Catholic grammar school, I was taught by members of the Sisters of Mercy who lived in a convent adjacent to the school. I was very curious about those women who wore stiff, uncomfortable medieval habits and lived together in a strict community with hardly any connection to family. They wore wedding rings as a sign that they were virginal brides of Christ. People point to peculiarities of extreme religious sects, but is there anything more cultish than a convent full of nuns? These women were attempting to merit their salvation through great personal sacrifice and pious religious devotion. But in nine years of schooling, the sisters never once mentioned to us the Gospel of salvation by God’s grace through faith in Jesus Christ alone as taught in God’s Word. Instead, they taught us the Catholic formula of salvation through the sacraments administered by the priests followed by obedience to the Ten Commandments (impossible!) and church rules. It was all about ritual, formalism, and religious legalism.

The nuns were not happy women. We students saw a side of them that our parents and adult parishioners were not privy to. There is no peace in religious striving. No one can possibly obey the Ten Commandments. The Law only condemns us as the sinners we are. Accept Jesus Christ as your Savior. He paid the penalty for your sins and He’s waiting for you to receive Him as Savior.

“Behold, I stand at the door and knock. If anyone hears my voice and opens the door, I will come in to him and eat with him, and he with me.” – Revelation 3:20

6 thoughts on “Behind convent doors”