My wife and I attended an independent fundamental Baptist (IFB) church back in the 80s. 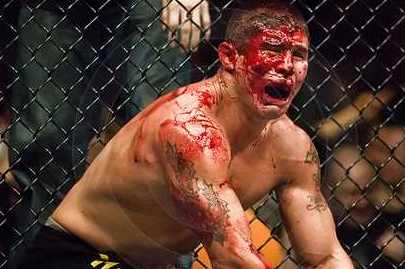 We have many good memories of the church as well as some disturbing ones. I became so increasingly upset by some of the things that went on at that church that we finally stopped attending and I even walked away from the Lord for a couple of decades. That was obviously a HUGE, HUGE, HUGE mistake. If I had been walking closely with the Lord, I would have just asked Him to find us another church right away.

Anyway, over the last couple of months I’ve been able to look back at some of the unusual, outrageous, and even comical events that we witnessed at that church. Here’s another one.

The pastor of our IFB church was on the short side but somewhat hefty. His suit jackets strained to contain his bulky chest and arms. He wasn’t someone you would want to mess with from his appearance. He was also a black belt karate master. Karate classes were eventually started at the church and many of the youth signed up. A couple of times the pastor put on his “karategi” (white karate uniform) and black belt and gave karate demonstrations, breaking wooden boards and cement cinder blocks, during church services.

The pastor’s sermons were usually peppered with references to physical fighting. He became especially animated when he preached on Old Testament passages in which one of God’s followers beat the snot out of some deserving pagan. Oftentimes, he would speak about desiring to straighten out some wayward Christian or some unsaved God-mocker he knew by “kicking their butt, in Christian love of course.” He always added that last part to make his aggression “okay.” He frequently encouraged the congregation by telling us, “if you don’t like my preaching, don’t let the door hit you in the behind.” Nice.

Initially, this in-your-face style of Christianity was an entertaining novelty. I was used to limp-wristed priests and brothers in Catholicism so this macho-man brand of Christianity was refreshing. The pastor often said Jesus was a tough guy, a carpenter-mason with thick, calloused hands who wasn’t afraid to go nose to nose with the religious big shots. But after the novelty wore off, the pastor’s tough guy approach became increasingly annoying. The Jesus who I read about in the New Testament was nothing like the he-man caricature the pastor spoke of.

As I remember, many other independent Baptist pastors took the crack-the-whip approach in their ministry back in the 80s but I think a lot of that has fizzled out. Our old pastor made tough guy, Mark Driscoll, look like Joel Osteen.

Application: If there’s a megalomaniac in the pulpit, don’t give up on God, find another church.

Post script: A wealthly church member bequeathed a large sum of cash to the church sixteen years ago. The money was used to build a large recreation center on the church campus. The pastor retired about five years ago because of health reasons and handed down the pastorate to his son, predictably, another martial arts enthusiast. The son has turned the rec center into a training facility for mixed martial arts (MMA) fighting. Can anyone imagine Jesus Christ beating someone’s face to a pulp in an MMA cage?

7 thoughts on “IFB Memories #8: Beating up people for Jesus”